In its 10th anniversary issue in 1980, Sail magazine named the Catalina 22 the boat that had represented the breakthrough in trailer/cruisers in those 10 years. There is no denying the popularity of the Catalina 22: more than 10,000 of the model we review here have been built, and that doesn’t include the Sport models now being sold. For many buyers, the Catalina 22 is their first “big” boat and an introduction to the Catalina line. Many remain with Catalina and buy up within that line.

Catalina is the largest sailboat in the US in dollar volume, and the firm is one of the lasting success stories in the industry. It foregoes national advertising in favor of local dealer-sponsored ads, and has remained a privately owned company while the trend has been toward conglomerate-owned boatbuilding.

Like all manufacturing boatbuilders today Catalina builds boats to a price, making the most of volume buying of materials and hardware, long-lived models, a high degree of standardization, and all the cost savings of high volume production. The Catalina 22 was the first boat built by Catalina.

The boat has been replaced by the Catalina 22 Sport. Introduced in 2004, the Catalina 22 Sport is still in production and it closely adheres to the original boat’s dimensions, and weight.  Although the post-’95 boats have resolved many of the problems we find here in the original, they did so at the expense of a feature that racers admired—a lighter weight hull. So, although it might not have all the improvements of later models, the one we look at here will hold a certain appeal to sailors in areas that are home to active C22’s fleets, as well as to sailors looking to start sailing for under $5K, and aren’t afraid to put a little sweat equity into the boat.

Just as it was when the boat was first introduced, the Catalina 22 is a common landing spot for those who are just beginning to dream of an escape. It is to Catalina’s credit that the 22 continues to sell and continues to be many sailors’ first boat. And perhaps one of the biggest selling points of all, is the broad and consistent support in the form of other owners. There really isn’t anything that can’t be fixed on these boats, and dialed in, they can be fun to sail. One need only drop in on the website for Chip Ford to get an idea of what’s possible with this boat.

It’s hard to argue with the construction of a boat after 10,000 have been built, but we do. In these early boats the hull-to-deck joint— a plywood reinforced hull flange is joined to the deck with a rigid polyester “slurry” and self-tapping fasteners. This not our idea of ideal construction. The same type of joint is used on larger boats, although we are less concerned because obviously the structure is for a much smaller boat. Larger boats like the Catalina 30 also used this method, and the C30 has enough loyal followers to earn it a spot among our recommended 30-footers from the 1970s.

Catalina 22 has remained essentially unchanged from the day it was introduced in 1969. Only the pivot for the swing keel version was changed about boat #250 and then, according to a Catalina statement, it was done for production purposes. Later a pop-top option was added and now 90% of the boats sold have this feature.

Catalina takes credit for pioneering the one-piece hull liner that has become standard in most high volume small boats. However, it should be noted that the liner is basically a cosmetic component, not a structural member, and the hull must get its strength from the hull laminate and bulkhead reinforcement.

The swing keel, also chosen by 90% of the buyers, is cast iron and, when retracted, remains substantially exposed (accounting for more than half of the 2′ draft of the shoal draft model). It is a rough 550 lb. iron casting of indifferent hydrodynamic efficiency, but you can order templates for fairing quite easily.

The swing keel is hoisted with a simple reel winch located under a vestigial bridgedeck with its handle passing through a plywood facing. We’d guess that Catalina owners soon become conditioned to its presence, though it can trip those stepping up or down through the companionway.

The drop keel of the Catalina evoked a number of observations from owners in the PS boat owners’ questionnaire. Several note that the keel hangar mounting bolts loosen or seize.  Another reports he had to replace his wire pennant twice. Replacing the pennant requires hoisting the boat high enough to have access to the top of the keel.

As with all Catalina-built boats, decor is a major selling point. The line, including the 22, is attractively appointed. They create a highly favorable impression which has to encourage sales, especially for first time boat buyers.

In fact, the Catalina 22 outside and inside is one of the most visually appealing small boats we have seen. It has enough trim and finish to look pretty. Similarly, her hull and rig, although dated, are well proportioned. It is about her performance and livability that we have the most serious qualms.

By any objective standard the Catalina 22 is hardly a sprightly performing small boat. There have been too many compromises to performance: trailerability, shoal draft, cockpit space, low cost, and interior accommodations, as well as giving her a placid disposition for novice sailors. The boat needs a genoa jib, a smoother, and more efficient swing or fin keel shape and some hardware of even the most modest go-fast variety. Even then the prognosis is that she will remain a rather tubby boat in an age when much of the fun of boats is in their responsiveness, if not speed.

With almost all the Catalinas having been built with the swing keel, the appeal has been her shallow draft for trailering. Yet even with 2′ of draft with the keel hoisted, the boat has too much draft for beaching. Given the tradeoff in performance, the difficulty of maintenance, and loss of stability, one hopes that indeed buyers of the swing keel 22 have made good use of it for trailering.

The deck of the Catalina 22 is a decidedly unhandy working platform. The sidedecks are narrow and obstructed by jib sheets and blocks. The three shrouds per side effectively block access to the foredeck, and complicate headsail trim and passage of the jib across in tacking. In fact, so difficult is it to go forward on the 22 we recommend getting rid of the lifelines. They are already too low to offer anything but token protection and they anchor near the base of the bow pulpit where they give no protection. Instead, handrails should be installed on the cabin top.

Ironically for a boat as popular as the Catalina, the boat incorporates the most incredible amount of wasted space we have ever seen in a sailboat large or small. In a size where stowage is at such a premium, there is a cavernous unusable space. The entire area under the cockpit and most of the area under the port cockpit seat (except where the gas tank sits) is all but inaccessible. The loss of this space limits stowage to scuttles under the berth bases.

The convertible dinette which seats only two with elbow room is a vestige of the 22’s design era and the vee berths forward form that combination of bathroom and bedroom that is common on a daysailer of these dimensions. The alternatives, here, have their shortcomings.

The easy solution is to relocate the head to the cockpit when you finally decided to retire for the night.  Otherwise, the settee on the starboard side, and even that berth is shared with the optional galley facility that in use takes up about half the berth area. The Catalina 22s now have a pop-top as standard; most of the cabin top lifts 10″ on four pipe supports. Most owners we have heard from seem to like the system, particularly those in warmer areas. Headroom at anchor is pleasant but we’d rather see room for stowage, sleeping, etc. as well.

One safety point in these older models that is worth raising is the stowage setup for the portable gas tank for a transom-mounted outboard auxiliary. The tank sits on a molded shelf (part of the hull liner) in a seat locker at the after end of the cockpit. This puts a portable gasoline tank inside the cabin.The locker is vented but it is not isolated. This arrangement can allow fuel can to make its way unimpeded to the inaccessible low point right under the cockpit. This design flaw has been corrected in later versions and if you have a boat with this arrangement, we recommend securing all portable tanks above deck until it is fixed.

One of the Catalina’s better features is her cockpit. It is long (7′) and comfortable, a place where the crew can sit with support for their backs, a place to brace their feet, and with room to avoid the tiller. It is unobstructed by the mainsheet that trims to a rod traveler on the stern.

Many boat buyers shop for a boat of this type with price foremost in mind. They probably will get no farther than their local Catalina dealer, where they can get a boat that is the same size and similarly equipped as boats costing far more. It’s apt to be a boat identical to many of those sailing on the same waters. Better still, they are more than likely to have sailing friends who not only have (or had) a Catalina but belong to one of the most widespread and active owners’ class associations in the sport. The whole package has a powerful appeal, especially to a newcomer seeking moral support.

For performance, accommodations and even construction they might do better at a higher price, but with Catalina’s proven staying power through decades of change, they understandably turn to the 22.

At a weight of about 2,500 lbs. loaded for the road plus a trailer, the Catalina 22 can be hauled by most cars. If anything but a jaunt to the boat ramp is envisioned, however, it’s big enough to recommend SUV with a trailer package. 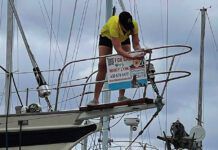 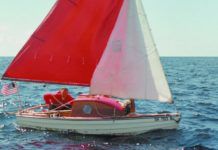