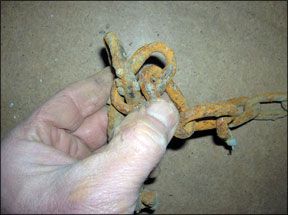 Practical Sailors 12-month results in the mooring chain test gave us no reason to change our previous ratings. Our vote still is for the Acco grade-30 proof coil. Its the best chain for the dollar. If youre made of money, you could set up your mooring with the Suncor stainless. But the dark side of stainless is that after years of cyclical loading, it can break without warning. Corrosion is just one of the factors affecting a chains integrity, and until we start putting these chains under load, and ultimately, testing them for breaking strength, many questions will remain unanswered.

Some Practical Sailor tests go on and on. And on. Back in November 2005, we put seven 5-foot lengths of 5/16-inch chain into Long Island Sound, in an area known to chew up chain in short order. Generally, owners of boats on moorings there need to replace the top sections of their chain&emdash;the parts mostly suspended in the water between the heavier, protected chain and the mooring ball&emdash;every three seasons, and sometimes more often. (The test set-up was initially described in the March 2006 issue and updated in the September 2006 issue.)

After six months, we pulled the chains out for a look. The six-month ratings are shown in the accompanying chart.

The chains were then moved from an area of more current and chop (and also high summer traffic) to the end of a private dock in a somewhat quieter cove. This time, they were suspended in individual loops and hung so that the bottoms of the loops rested in mud and the upper ends in shallow water, exposed to a lot of tide, occasional wave action, and, depending on the moon, air. They were pulled at the beginning of December 2006.

What we found, predictably enough, was fouling and rust. We put no load on the chains, and didnt expect to see much loss of material; however, once we busted off some of the barnacles, we did find a more pronounced loss in the Campbell and Chinese proof coil specimens. As we noted in earlier articles, these two chains appeared identical initially, and they fared about the same in the six-month review. At 12 months, we could give a slight nod to the Campbell, which looks marginally better than the Chinese, but really, given the vagaries of real-world testing, the informality of judgment, and the possibility that they are, in fact, different brandings of the same chain, the difference isn’t enough to split the ratings. They both get the same as last time: Fair.

Since these ratings are relative, we can elevate the Suncor stainless from Good to Excellent. At the six-month review, we noted that the chain was strong and clean, but we worried whether discoloration at the welds would develop into corrosion. At 12 months, the answer is no. The Suncor looks just about perfect. Maybe one of our metallurgical subscribers can comment.

As for a recommendation, we see no reason to change chain choices. Our vote would still be for the straight Acco grade-30 proof coil. Its the best chain for the dollar. If youre made of money, or keep a really small boat in really shallow water, you could set up your mooring with the Suncor stainless. But the dark side of stainless is that after years cyclical loading, it can break without warning.

Our test so far is not putting the chains under load, so no work hardening is occurring. Corrosion is just one of the factors affecting a chains integrity, and until we start putting these chains under load, and ultimately, testing them for breaking strength, many questions will remain unanswered. With stainless steel in particular, disregarding work hardening under real mooring and anchoring loads involves a serious leap of faith (see “Marine Metals,” February 2007). Stainless steel sees so little use in high-load-cycle applications precisely because it does not hold up as well to this use as materials with higher ferrous content. Its ever-shiney surface can actually be a disadvantage, revealing no clues to impending failure.

The chains spent the cold winter months lying in a bed of mud and ice. This spring, they were strung together and slightly twisted into a sort of chain skein, and hung overboard, completely out of the mud, but more often in the air. In order to induce some extra stress, weve passed the chain skein through a cinderblock, which weighs down the skein as the tide falls. To oppose that, weve attached a Taylor-Made buoy to the cinderblock. Well report again in the fall.