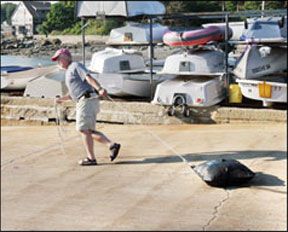 Unlike their rigid counterparts, small flexible tanks make adding small stores of drinking water aboard a cruising boat relatively easy. But not all flexible tanks are equal in terms of ability to withstand wear and tear. Practical Sailors testers evaluated popular models from Vetus (http://www.vetus.com/), Nauta (Imtra Corp., http://www.imtra.com/), and Plastimo (Navimo USA, http://www.navimousa.com/). The Vetus and Nauta tanks are rated to hold 14.5 gallons (55 liters), while the Plastimo tank holds 13.2 gallons. Testers took note of each tanks flexibility, weight, construction, seams, tie-down grommets or straps, valves, exterior and internal materials, capacity, and other characteristics. The smell and taste of the stored water were evaluated. The tanks also faced abrasion, seam strength, and drop tests&emdash;and thats what separated the weak from the winners in the water storage arena.

Weve all heard the old adage “You can never judge a book by its cover.” Well, this age-old wisdom is equally true when checking out flexible water tanks. At first glance, they often appear as rugged as Bruce Willis in one of his “Die Hard” movies. However, it takes more than a seemingly tough hide to pass the Practical Sailor field tests.

To put the tanks tough hides to the test, we decided to subject them to some intentional abuse. Testers filled each tank to capacity, and then&emdash;one by one&emdash;suspended each tank from a davit 7 feet above a concrete dock. Testers cut the hoist line and allowed each tank to drop to the dock.

To test abrasion resistance, testers dragged each full tank along a 150-foot stretch of concrete, using a rope laced through the tanks grommets or straps.

To check seam strength, each tank was filled and allowed to swell in the sunlight. Afterward, water was poured from each tank for a taste test and a smell test.

A planned test for puncture resistance using nails protruding one-half inch from a sheet of plywood was scrapped after one tank failed the abrasion test and another appeared weakened.

A product of the Dutch company Vetus-den Ouden, the 14.5-gallon Vetus V-55 flexible water tank has a rugged, industrial appearance. The blue tank is made of woven polyester, coated on both sides with Alcryn. It measures 27 by 31 inches. When filled, it expands about 10 inches.

One valve hole is pre-cut. The second must be cut later, depending on how the tank is to be installed. Testers found the Vetus-supplied wrench provided to tighten the valves to be too flimsy.

A metal grommet at each corner makes it easy to tie down once installed. As with any flexible water tank, the Vetus grommets or other fittings are meant solely as a way to keep the tank from shifting and are not for suspension.

Taste tests found that water stored in the Vetus tank had no discernible taste or smell. The manufacturer suggests sterilizing the tank by leaving a 1:5 white vinegar-water solution in the tank and pipes for two weeks, then flushing it with water and baking soda.

The Vetus tank easily survived the drop test, and its seams remained intact. However, it did show some wear after being dragged 150 feet across concrete. Despite the abrasions, the tank did not leak.

The Vetus is a well-made tank, but we would like to see a different valve system that allows for easier installation.

The Nauta FT911121, made in France by the Imtra Corp., is a black, nearly square tank. At first glance, the 14.5-gallon tank appears heavy-duty, more so than the other tanks tested. The exterior is constructed of 840-Denier nylon and coated with a neoprene/Nitrile compound. It has four strong metal grommets, one at each corner, to secure it after installation. The Nauta measures 26 x 24 inches before inflation.

The tanks fill valve, located dead center, is well-made and easy to operate.

Testers found that water stored in the tank had no discernible taste or odor. The inner liner is Nitrile, which the company claims is tasteless and odorless. Imtra suggests rinsing the tank before its initial use with a solution of warm water and 1 percent mild detergent. The company also recommends using chlorine tablets when tank is in use.

The Nauta tank survived the drop test, but some of the seams were stressed. It failed the abrasion test: It began leaking from a hole worn in the outer material after it was dragged approximately 70 feet over concrete.

The Nauta tank comes with a five-year warranty. Its easy to install, but despite its rugged appearance, it did not perform as well as the other tanks tested.

Also made by a French company, the blue Plastimo 18031 is unlike the other two tanks tested. It is actually a three-part tank: It has an outer shell, a bladder, and a valve assembly. The inner bladder is a welded, non-porous, PVC water chamber, protected by an outer skin of nylon. The bladder is easily removed for maintenance, cleaning, and inspection.

Designed to hold 13 gallons, the Plastimo tank was the smallest of the three test products. It measures 27.3 inches square, and has valves installed on both sides to accommodate a fill and a drain.

Also unlike the other tanks, the Plastimo has four corner straps rather than grommets to hold it in place.

Taste-test results found that water from the Plastimo tank had a slight rubbery taste, but the manufacturer said this can be remedied by rinsing the bladder with a vinegar solution before filling it with water.

The Plastimo tank survived the drop test with no discernible wear. It also passed the abrasion test with the nylon exterior showing only a few scratches, no punctures.

The Plastimo tank performed admirably, although we think the nylon corner straps will likely break over time. We would prefer metal grommets or a more heavy-duty bolt-rope sewn into the exterior cover. Its unique construction and resistance to abuse earn the Plastimo the Practical Sailor Best Choice.

Unlike their rigid counterparts, small flexible tanks make adding small stores of drinking water aboard a cruising vessel relatively easy. They also provide boat designers with more options than rigid tanks. But not all flexible tanks are equal in terms of ability to withstand wear and tear.

testers found that the Plastimo tank, the least expensive of those tested, outperformed both the Vetus and the Nauta in most categories. We would like to see Plastimo improve the relatively flimsy corner straps used to secure it in the boat. The Vetus model was superior in a few aspects, and we recommend it highly. The Nauta tank did not hold up to testing as well as the others.