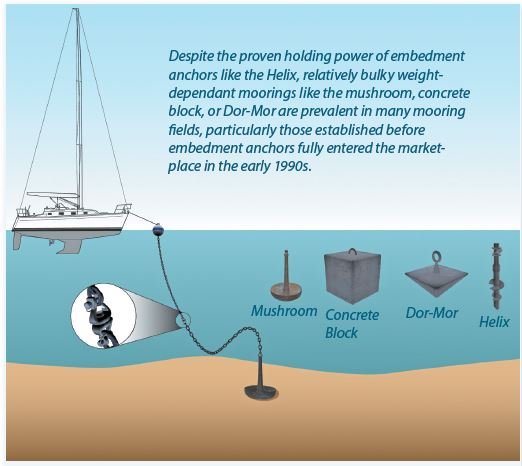 The mechanics at work at the other end of your mooring line matter as much as the mooring line and pendant. In 2009, Practical Sailor reported on two pull tests held 12 years apart (See Mooring Anchors for Sensitive Seabeds, Practical Sailor August 2009). We also reported on the results of a third test being carried out by contractors for the City of Sarasota, which at that time was about to become one of Floridas seven pilot mooring fields. Boot Key Mooring Field, which took a near direct hit from Hurricane Irma in 2017, was another harbor participant in the program (see adjacent article).

The first test, in 1995, headed by the BoatUS Foundation for Boating Safety, used a tugboat to exert angled pulls. The second was carried out in the summer of 2007 by volunteers at the Sarasota Sailing Squadron using inflatable lift bags that exerted a vertical pull.

In both tests, embedment-type anchors (typically screws) clearly showed greater holding power than those that relied mostly on weight and mass for resistance. Downsides to a screw is the need for specialized equipment to achieve maximum strength, and their weakness in soft mud. Another concern is that if the embedment anchor pulls out, there is no hope of it resetting itself or even slowing the boats drag. Two types we looked at were the Manta and the Helix.

After a round of testing of embedment anchors in 2009, both the city and the squadron opted for Helix-type moorings. Core samples revealed a rock layer 8-feet below the sand and clay bottom, which posed a challenge for getting maximum strength. Ultimately, after going through two different contractors, the town of Sarasota met the states requirements. Pull tests in the municipal field put the Helix holding power at 18,000 pounds, far greater than the expected loads on a 40-foot boat in 60-knot winds.