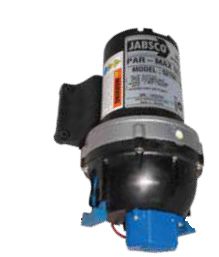 It remains a mystery why deck washdown systems aren’t standard equipment aboard every boat. Seagull poop, fish blood, and yes, even the calling card of those suffering from mal de mer, are all easier to remove sooner rather than later, when they are dried to a concrete-like consistency.

In addition to overall cleanliness, a washdown system makes sense for a number of other reasons. From a safety standpoint, slimy decks are a slip-hazard, while walking about the deck with sand or grit underfoot is murder on gelcoat and painted finishes alike. Cleaning muddy anchor rodes prior to storage not only keeps pump-clogging goo and debris out of bilges and anchor locker drains, but also prevents the unhygienic smell of Davy Jones’ gym locker from permeating the entire boat.

Like many of the products we test at Practical Sailor, deck washdown pumps live in the bowels of a boat, unsung heros called upon to perform their duty with little thought to maintenance—no thought at all in most cases, unless they require repair or replacement. When that time comes, or when adding a washdown system to your boat, you’ll want to choose a reliable pump that not only meets your needs, but performs as advertised.

As with our last test of washdown pumps (Jan. 1, 2005), our goal for this test was to assemble a wide range of high-pressure pumps capable of handling washdown chores aboard anything from a small weekender to a mid-size cruiser. We looked at eight pumps from four manufacturers—Shurflo, Jabsco /ITT, SPX Johnson Pump, and Groco Marine Products—that would serve well for either saltwater or freshwater washdowns.

All of the manufacturer’s specialize in marine products. The California-based Shurflo, part of Pentair’s Flow Technology Group, has been a leading supplier to the marine and RV markets since 1968. Jabsco—a segment of ITT Flow Control, which has factories in the U.S. and U.K.—manufactures recreational marine products, including water and waste systems and engine cooling pumps. Johnson Pump, a member of Flow Technology, has been one of the world’s leading manufacturers of marine pumps for 30-plus years. Johnson-brand products are manufactured in the U.S., Sweden, Belgium, India, and the Netherlands. The Maryland-based Groco has been making marine hardware since 1918; the company also manufactures products for the industrial and automotive markets.

We limited the field to pumps using 12 volts DC as their power source. All those tested are diaphragm pumps, except the Groco product, which is a vane pump (and was the only one that did not self-prime well).

Prices ranged from $96 to $330, with advertised flow ratings from 3.5 to 7 gallons per minute (GPM). Many came packaged as kits and included a variety of additional deck-washdown system parts—from nozzles and hoses, to wire connectors and breakers.

Some of the test pumps are updated versions of those we tested in 2005. We also included the 2005 top pick, the Groco C-60, as a baseline for comparison.

To keep the power absolutely constant, electricity was supplied by a CSI Speco PSR-50 12V regulated power supply set to provide 13.8 volts DC. We mounted each pump to a test platform located directly above a 45-gallon supply tank and connected them to a fuse panel with fuses sized as close to specifications as we could find. Two feet of No. 14 wire connected the power supply to the fuse block energizing the pumps, which was then connected to each pump with 6 feet of No. 14 wire. Monitoring of the supply voltage was accomplished with a Fluke 77/BN multimeter. The readings listed in the “Amps” column in the accompanying Value Guide ignore the pumps’ high start-up amperages; readings were taken once the pumps had settled down to work on moving the water steadily.

Open-flow measurements were taken by pumping fresh water from the supply tank 30 inches below the pump into an 18-gallon receiver tank at the end of 15 feet of standard 5/8-inch garden hose. Once the pumps were primed and ready, we calculated per-minute flow rates by timing the flow into the measured tank over two runs. A 42-inch section of 3/4-inch reinforced nylon hose was used as the pump intake for all testing. Pump outlets were connected directly to the garden hose.

In cases where test results appeared unusual (such as those that exceeded their GPM rating or had low restricted power draw), the tests were repeated until the numbers were beyond question.

Restricted testing was accomplished in a similar manner, except that we added a hose nozzle to the end of the garden hose and measured power usage and how far the stream sprayed. Each pump was given a “pressure rating” based on how well the pump was able to push water through the nozzle. If water came out with the same velocity and sprayed the same distance as it did when connected to our municipal water supply (approximately 37 feet), we gave it a Good rating; if it was less, the pump received a Poor rating; if it was more, the pump received an Excellent rating.

In addition to the big four rating categories (output, power consumption, cost, and warranty), pumps were also given pluses for features such as easy setup and having additional washdown system components provided.

Most all pumps tested featured some form of “quick connect” type input and output ports instead of threaded fittings. Quick connectors swivel 360 degrees, can be assembled and disassembled easily, and are unlikely to leak. However, replacements for damaged quick connectors are not as readily available as the old standby threaded fittings or hose clamps, particularly in remote areas, and annual winterizing with alcohol based products can take its toll on these. Also, quick connectors must be robust and operate smoothly; we’ve seen instances where bad design allowed them to fail easily.

Each of the Aqua Jet pumps performed well. The WD4.0 met its advertised output, and although WD3.5 was slightly below its rated GPM, it bested many of the larger pumps in the restricted testing and used the least amount of power.

Their bigger brother, the WD5.2, was one of only two pumps that exceeded its rated output in the test. In open-flow testing, it managed a flow rate of 5.45 GPM, besting all other pumps with an advertised rating of 6 GPM or less.

Bottom line: Although we’d like to see it backed with the three-year warranty prevalent among the rest of our test group, the ProBlaster offered a good mix of performance, power consumption, and price. It’s a Recommended pump.

Testers evaluated two pumps from Jabsco, the Par-Max Ultra 4.0 and Par-Max Ultra 7.0. Both came as kits that included a number of essential washdown system components, from coil hoses and nozzles, to intake strainers, and (in the case of the 7.0) wire connectors and a 35-amp breaker. Each of the pumps appeared robust and well constructed. At 13 pounds, the 7.0 was not only the largest pump tested, but it also had the highest advertised output pressure (80 psi).

We liked the kit approach of the Par-Max pumps, both from a pricing and installation standpoint, as it helps ensure correct matching of system components to maker specifications. The owner’s manual for the 7.0 was also one of the best of the group; it even provided (as did the Groco) the American Boat and Yacht Counsel wiring guide to help select proper wire for installation.

Unrestricted output for the 4.0 and 7.0 was slightly less than advertised; however, both performed well during our restricted pressure testing, garnering a Good and Excellent, respectively. In restricted testing, the 7.0 used only 5.6 amps, much less than what Jabsco claims the pump should draw; the test was repeated multiple times, each with the same result. According to the maker, the pump has a bypass that re-circulates pressure within the head to prevent pulsation when the nozzle is restricted. If the system pressure hits about 55 psi (where the bypass opens up),the amps could drop while in restricted mode.

At $330, the Par-Max 7.0 tied with the Groco C-60 for highest price pump, but included numerous additional components needed for installation.

Bottom line: Although slightly outperformed by the Groco C-60, the better warranty (three years), reduced amp use, and accessories included with the Par-Max 7.0 kit make it our Best Choice for a higher-output washdown pump.

Constructed of bronze and stainless steel, the Groco C-60 is a vane pump with an advanced timer/pressure switch that shuts off the pump if it runs continuously for more than 10 minutes or dry for more than 30 seconds. It recycles when the power is interrupted for 15 seconds.

Testers’ top pick in 2005, the C-60 Deck Wash Kit is packaged from the factory with the motor, attached pump, associated plumbing, pressure switch, and electrical gear mounted to a plastic board. To install the pump in a boat, the plastic board would be bolted to an appropriate bulkhead or deck location. A one-way check valve is included and must be installed in the water inlet line to maintain a positive feed to the pump.

The C-60 is powerful and well-built. Its performance during our test was exceptional, where it actually slightly exceeded its advertised flow rate of 6.5 GPM, hitting 7 GPM in the open-flow testing. The C-60 also earned an Excellent pressure rating during the restricted-flow test with a record-setting distance of 46 feet. On the downside, the C-60 was unable to self prime during our test and had to be primed by our testers for the first run.

Bottom line: The Groco C-60’s impressive output and construction—it’s built like a tank—earn it our recommendation. Its shorter warranty period and greater power consumption kept it out of the top-pick circle.