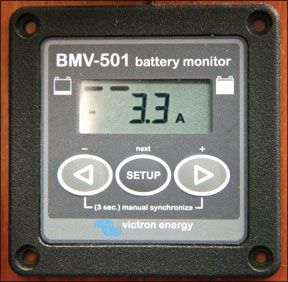 While building Balæna, I was sure that we would never need a large battery capacity. With no electronic navigation aids and kerosene lighting—this was in the early 1990s—the only significant power drain was from a tricolor light that we used when there was shipping around, otherwise we used a kerosene lantern.

About 10 years ago, the rot set in, and we added radar, GPS, radios, computers, and other goodies. Though still meager, our power demands increased, and to meet those new loads, I fitted a higher-output alternator, multi-stage regulator, and deep-cycle batteries.

Two years later, we started a cruise that has taken us to every climate between the Southern Ocean and Arctic. During that time, we’ve followed a strict approach to onboard power management. By keeping our batteries charged and avoiding deep discharges, we’ve gotten eight long years of service from some relatively inexpensive wet-cell batteries. Admittedly, our path may be impractical aboard some of the more power-hungry boats cruising today, but we hope this field report on specific products will be useful to all sailors.

The accompanying article, “Getting the Most Out of Wet-cell Batteries” , profiles a more standard approach to battery selection, charging, and maintenance.

After going through our first set of batteries far too quickly, I was lucky enough to meet Nelson Stevens, who had moved from the United States to open Wireless Chile, an alternative energy business in Chile. Stevens helped redesign the boat’s system and supplied four Trojan 6-volt T105 deep-cycle batteries, rated at 225 amp hours each. The batteries were paired in series, and then the pairs were wired in parallel to create a house bank with a 450 amp-hour capacity. An 85-amp heavy-duty Bosch alternator, a Solarex 55-watt solar panel, a 75-watt Shell solar panel, and a Rutland wind generator (rated at 90 watts in a 22-mph wind) handle charging duties. Ideally, we’d like one more solar panel.

Batteries like to be cool. Securing them fairly low in the hull keeps them cooler, and it also puts weight where it belongs. Batteries release hydrogen gas during charging, so the battery space should also be well ventilated. Unfortunately, our only available space is close to the engine compartment, so the batteries are occasionally warmer than I would like. With regard to battery performance and ambient temperatures, we’ve found that our wet-cell Trojan batteries hold up very well in the cold. While the boat was laid up in Labrador, cabin temperature dipped well below zero degrees F, but the electrolyte in the fully charged batteries did not freeze and the batteries held their voltage surprisingly well.

Trojan recommends that these deep-cycle batteries should not be discharged greater than 50 percent of capacity and advises users to routinely recharge themto full capacity. We try to always keep our batteries above 70 percent and routinely recharge them as fully as possible. In practice, recharging batteries back to 100 percent presents a challenge for sailboats that do not have access to shore power.

The amount of current accepted by a battery tapers as it is being recharged. If a battery is deeply discharged, it accepts more current. As the state of charge increases, the battery will accept only a small current. Since we do not often cycle our batteries beyond the 20 percent discharge level, the battery only accepts a fraction of our alternator’s maximum 85-amp output. So, in our case, relying solely on the engine to top-off our batteries every day would be a waste of fuel. In fact, many people who rely primarily on engine time to charge their batteries adopt a deeper charging cycle—discharging to 50 percent and recharging to about 85 percent, the “sweet spot” in which the highest rate of charging can take place.

To maximize charging cycles without gobbling up our limited fuel supplies or incurring costly engine time, we quickly discovered the importance of solar panels. Even in Southern Patagonia, there can be plenty of sunshine in the middle of winter. The panels deliver the sort of current needed to top off the batteries. So even if you plan to rely on your alternator for charging, it still makes sense to have solar input and not use fuel trying to top off your batteries.

Deep cycling and infrequent charging can lead to sulfation on the battery plates, which ultimately can shorten battery life. This is not a major problem in our case, but to monitor this, we check the specific gravity of individual cells when fully charged. If there is a difference between cells, or worse still, none of the cells reaches the specified value, then we equalize. This involves raising charging voltage to 15-16 volts to soften up the hardened sulfates. This is tricky business. During equalization, the batteries become hot and lose water, so both temperature and water level have to be monitored. Otherwise you run the risk of ruining batteries or even causing a fire. Practical Sailor is long-term testing some of the newer “pulse” chargers that claim to combat sulfation without the risks commonly associated with equalization.

With our combination of solar (120 watts) and wind power, an 85-amp alternator, multi-step regulator, and efficient battery monitor, we are able to supply power for computers, navigation, lighting, SSB radio, modem, refrigeration, and best of all, music. We don’t often run the engine solely for the purpose of battery charging.

Compared to many modern cruising boats, which can chew through 120 amp-hours or more per day, our power demands are meager. I estimate our daily power consumption to average around 45 amp-hours in the tropics and 25 amp-hours in higher latitudes. We occasionally have much higher demands that we try to synchronize with periods of motoring.

While there may be better approaches for others, we’re happy with the system. Eight years with one set of wet-cell house batteries and limited engine idling offers living proof of its economy. We hope the following summary of our experiences with the battery and related equipment will aid some other like-minded sailors:

• Trojan batteries: Relatively inexpensive and readily available worldwide, our thick-plate, 6-volt wet-cell batteries have served us well. Our four Trojan T105 batteries are in excellent shape after eight years. Manufacturers talk in terms of the number of cycles a battery will last with either 50-percent or 80-percent discharge for each cycle. According to Trojan, our batteries will go through more than twice as many cycles if discharged only to 80 percent instead of 50, and our experience bears that out. In eight years, we have rarely, if ever, exceeded 50 percent. Our typical cycle is closer to half that. We constantly receive a charge from solar and wind power, and it is not unusual for the battery state to remain steady even when we have high demands.

We have not found regular checking and maintenance to be a big chore. The only disadvantage is that, because the deep-cycle design leads to slow electrolyte percolation, high energy demands can cause the voltage to drop below what one would expect. This sometimes creates a problem with voltage-sensitive equipment.

• Xantrex XAR “Smart” alternator regulator: There is a growing field of “smart” alternator regulators marketed to the recreational marine market. Practical Sailor’s last test of regulators (Feb. 1, 1997) featured products from Balmar and Hehr Power Systems. On Balæna, we’ve been quite happy with our Xantrex XAR. All the circuitry is potted in resin to protect against moisture. Installation was easy. Bulk, absorption, and float stages are automatically controlled, and there is a manual equalization option. The user can select preset values for different battery types.

• 85-amp alternator: Our Bosch alternator is a heavy-duty, high-output automotive model, internationally available, and therefore, inexpensive and easily serviced and repaired. The built-in regulator is easily replaced by a brush set from BEP electronics to which the Xantrex regulator is connected. We have had no problems with it, and the original brushes are fine after 10 years of use.

• Battery monitor: A precise battery monitor is essential to maintaining good battery health. Ours is a BMV 501 designed by Victron Energy, a European company that makes a full line of charging and power supply equipment for boats. The monitor provides an accurate measure of voltage, current, and the battery state of charge. Practical Sailor has also had good luck with the Xantrex XBM battery monitor (Chandlery, January 2008).

• Battery relay: It is essential to separate the domestic and engine battery banks. The simplest system involves a manual 1-2-Both-Off switch. We had a BEP voltage sensing relay that directed charge to both batteries when needed, but that gave up the ghost. Although less than ideal, the new approach employs a heavy-duty 80-amp relay (activated with the starter switch) to insure the two battery banks remain isolated unless the engine is running.

• Solar panels: The total capacity is 120 watts, which yields a maximum of about 7.5 amps. This keeps pace with most regular requirements. However, as we spend more and more time on the computer, we would like to add another 75 watts.

By building a system from the ground up, we were able to select equipment that met our specific demands. While there may be better equipment out there, our selection has served us fine for more than eight hard years. We almost never use a marina and can’t imagine cruising any other way.