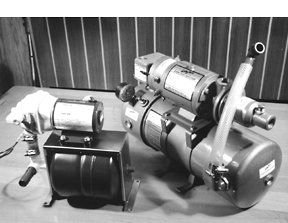 At the heart of freshwater systems aboard boats are 12V pumps. Sometimes they’re 24V, but that generally means you have a boat big enough to have paid help to worry about mundane things like water. We’ll stick to the 12V units here.

Big, small, cheap, or expensive, one common denominator of all of these pumps is that they make noise in the confines of the boat—enough noise to be annoying. There are no secrets when people are running water in the middle of the night, and if there’s a leak in the system, it’s on, off, on, off, on, off… You can go bonkers.

Another not-uncommon occurrence: A just-lathered-up soul taking a shower yelps when somebody starts washing dishes. It happens often enough in a well-plumbed house, but on a boat that loss of pressure is quite pronounced, and usually means the pump is too small to properly serve simultaneously two outlets.

A third problem: “Hey, don’t stand in that shower all day; you’re running the batteries flat.”

There have been some recent developments in freshwater pumps, the most important of which are new switches and a variable-power pump that senses the pressure and adjusts the power to the flow. These new devices are to replace the ever-troublesome pressure switch. (A Practical Sailor reader survey a few years ago indicated that 43% of pump failures are really pressure switch failures. That’s more than the total of the next three causes—18% motors, 11% diaphragms, and 2.4% belts.) 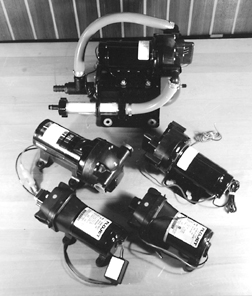 So, let’s take a look at a dozen or so pumps—both old reliables and new techs—on the market.

We didn’t test everything available. There is a plethora of pumps, all good healthy competition within company brands and even within manufacturing divisions, multiplied by voltage and sizes meant for one outlet, two outlets, etc., stated in gallons per minute of flow.

Practical Sailor’s selection of pumps to be tested was limited, with an exception or two, to those with modest gallons-per-minute ratings and fairly low costs.

You rarely get the “rated” flow at a faucet. Manufacturers’ ratings are for simple horizontal outputs with no obstructions, no turns, no strainers, no check valves…just straight into the input fitting and out the output fitting. That doesn’t mean the manufacturers are playing with you; it’s the only fair way to rate the pumps.

If you’re fussy about flow, you must allow for the differences caused by twists and turns in the line, the height of the “lift,” and various other output-affecting details, like filters, strainers, valves, etc. In addition, a battery not at peak voltage delivers far less water than one fully charged.

Something else to note: Manufacturers don’t like you to use filters. Strainers are okay. They are relatively coarse screens. But filters, which have denser filter cartridges (especially when they load up), greatly impede the flow and overwork the pump. If you want to use a filter, buy a bigger pump.

By and large, these pumps are extremely reliable. They run for years without any attention whatsoever. What fails most often is the pressure switch mentioned above. This is discussed in a separate report on page 9.

The Test Apparatus
To test these pumps, a pressure gauge and shut-off valve were rigged on an upright plywood board that provides about a six-foot lift, which we think would be on the maximum side for boats of no more than 40 feet in length.

As you might note in the photograph below right, the rig has a 3/4″ outlet with 3/4″ hose leading down to a calibrated container. This permits precisely timed runs, to determine the actual gallons-per-minute flow.

To accommodate the specified fittings on the different pumps, the rig is served on the intake side by both 3/4″ inlets and 1/2″ inlets, each with a separate on/off valve. Check valves were not used in either line.

To keep the power absolutely constant, the electricity is supplied by a 12V regulated power supply, which converts 110V AC to 13.8V DC and can supply up to10 amps, which was the most required for the biggest pump we tested, except perhaps for the monster-sized Galley Maids, which we merely observed from a prudent distance. Because of the ample power supply, the pumps performed at, near, or sometimes better than their gpm ratings.

To summarize, the water, propelled by constant power, passes in the 1/2″ circuit through a 90° elbow at the intake end, takes a 360° loop, through an on/off valve, straight through a T-fitting, to another 90° elbow, past a pressure gauge, through a big on/off valve, and one more 90° elbow, at the output end.

The 3/4″ circuit is similar, but with an extra 90° elbow and an extra right angle turn through the T.

For the curious, the routine was to fit the hoses to a pump, connect the power and adjust the intermediate on/off valves (for either the 1/2″ or 3/4″ circuit). With the intake in a pan of water, the pump was run for a few moments to charge the hoses with water. The main valve (at the top of the board) then was shut off, with the pump still ready to deliver.

After redistributing the water, the main valve was opened, a stopwatch was activated, and flow rate was measured. In separate pumping runs, decibels were read on a sensitive Quest decibel meter placed one foot away from the pump, and the amps drawn were noted with a clamp-on meter carefully zeroed each time.

Note on the chart, in the “Decibels” column, that the figures are not radically disparate. Zero is the least human perceptible noise. Radio music, played softly from 15 feet away, is about 40-50 decibels. The difference between 75 and 80 decibels is remarkable…and the 61-87 range obtained from these pumps produced verbal observations from, “Boy, that’s a noisy one,” to, “Nice, very quiet.”

To be fair, it should be noted that the noise made by these pumps, when placed in the open on a 1/2″ plywood platform, was greater than it might be if tucked away on a boat. However, the primary object here was to compare.

Bear in mind that there’s not a pump made that won’t wake up the whole boat when some early riser gets up at 0500 and fills a teakettle to start the morning coffee. The answer: Fill the kettle the night before.

For the “Amps” column on the chart, the high start-up amperages were ignored. What is shown are the readings taken after a few seconds, when a given pump had settled down to work on moving the water steadily.

In the final ratings, a plus was given for any pump with tinned wire, which is paramount in the marine environment. Most pumps have copper wire, soldered on the end, but the moisture creeps under the cover and eventually corrodes the copper. Practical Sailor has always recommended tinned copper wire, like that made by Ancor.

Another plus was given if a pump’s input and output ports were of the “quick connect” type, in which an O-ring and a snap-in locking retainer (rather like a fork or square-cornered horseshoe) is used instead of threaded female openings or hose clamps. Useful as they are, threads are difficult to make leak-proof, and hose clamps, in our view, rank high on the list of man’s most mismanufactured and misused inventions.

The quick connectors swivel 360°, can be assembled and disassembled easily, and do not leak. Those who have, while bent like a pretzel standing on its head, tried to tighten a leaking thread or tighten a hose clamp in a hidden-from-view awkward position can decide how big a plus to give these new connectors. We find them very likable. The snap-together idea was originated by Whale, the Irish pump manufacturer, and won the 1999 IMTEC innovation award.

In several cases, where the test results appeared unusual (such as those pumps that exceeded their gpm ratings), the tests were repeated until the numbers were beyond question.

Conclusions
So, what pump should you order to replace your noisy, panting old one, or, bless you, specify for your new boat, given the blessing of your builder to do so?

For a moment, forget price. As we all know, once in a while the best thing costs less money. But that’s not the way to bet. As a rule, you get what you pay for: a higher price generally means higher quality and a desirable by-product: long, trouble-free service.

However, in a competitive world that is forced to replace stainless steel and bronze with plastic (which, besides having a great price advantage, is also lighter in weight), pump manufacturers live with the same basic truths dictated by conflicting requirements: Hold down the noise, increase the flow, and restrain the power. Increase the power, up goes the flow and the noise and amps. Cutting the noise means a smaller, quieter motor, fewer amps, and less water.

You’d think they’d all fit some formula. They don’t. But some provide a better mix of the three elements—noise, flow, and power.

In our view, the test indicated that the best melding of these qualities was presented by the Swedish-made Johnson Aqua Jet Uno 3.4. Virtually all plastic, this pump is not cheap ($450 list), but makes good on its claim to be “whisper quiet.” Of those tested, it’s the quietest pump, and it ranked third for low power consumption and tied for fifth for the volume of water pumped.

Practical Sailor’s opinion may not match your preferences. So, by examining the rankings on the chart, you can find pumps that more nearly meet your desires, whether those desires emphasize the quietness (if you have light sleepers aboard), minimum power (if, for instance, you have a small boat with one battery maintained by an alternator on an outboard or a solar panel) or lots of water from multiple spigots.

If you lack the time to examine the chart closely, we’ve broken the test ratings down to the top five pumps in each of the three categories—quietness, power consumption, and water volume. These choices are shown in the “Rankings” sidebar below.

Finally, since we’re in the joyful position of never having to hawk gear, we would remind you that, while they can be mighty convenient, electrical freshwater pumps aren’t necessary at all. Human-powered pumps and, for showers, gravity, have served very well for ages aboard boats. See PS, October 1, 2002, for a review of manual (and pedal) pumps. Whale’s Gusher Mark III pedal pump, for example, throws lots of water—at 0 amps. 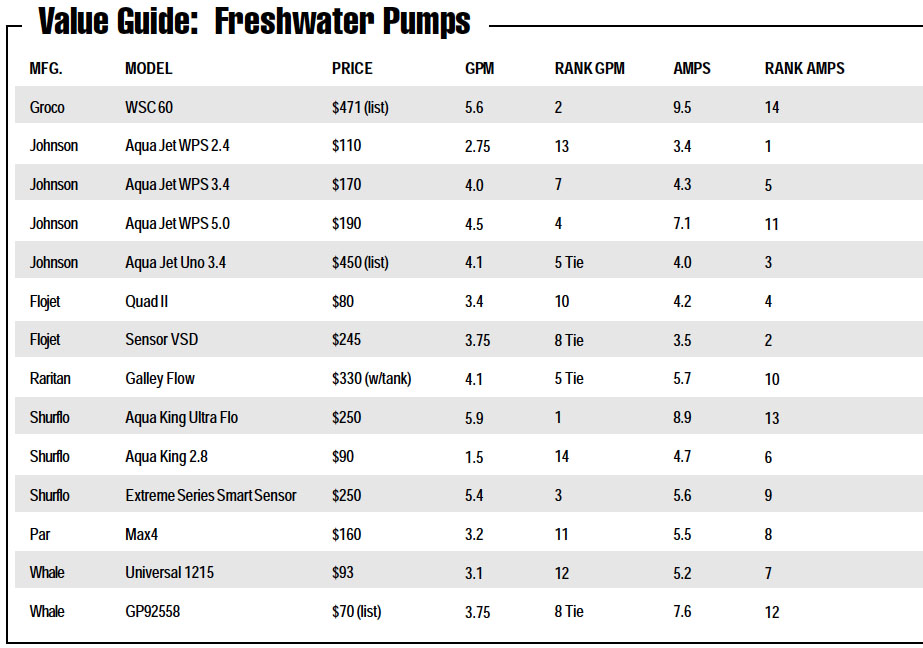 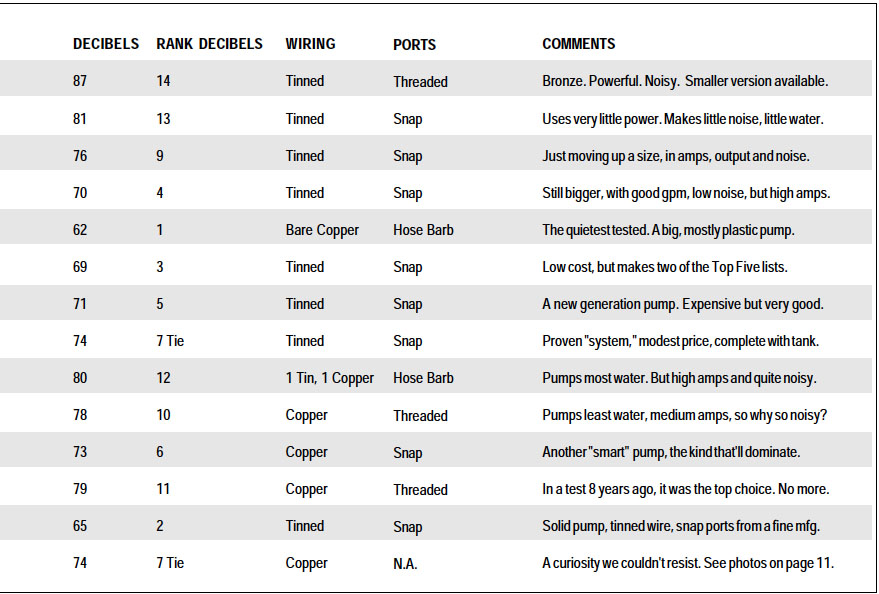