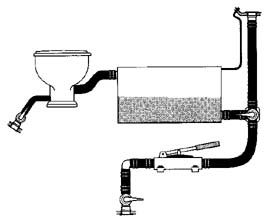 If you’d asked the yachtsman of 30 years ago if some day he’d be lugging around his sewage in a tank, he’d probably have said no friggin’ way. If you could have convinced him that the oceans were being polluted at a rate much faster than he imagined, he might logically have predicted that science would by now have come up with a solution.

Future Shock promised us as much…perhaps a Star Trek-style phazer gun…a small electronic gizmo in a black handheld remote that when pointed at a toilet or small tank of waste simply makes it disappear.

Of course, you don’t want to simply move it somewhere else, like beaming it into your home. No thanks. Send it away and make it stay away!

Well, Type I MSDs (marine sanitation devices that treat sewage and reduce coliform bacteria count to less than 1,000 per milliliters and no visible solids), such as Raritan’s Lectra/San, SeaLand’s San-X and Groco’s GM series, are about as close as we’ve come to phazers. Unfortunately, they’re bigger than a Group 24 12-volt battery, draw considerable electrical current (45 amps for the Lectra/San), make some noise, and worse, are not even legal in the nation’s rapidly multiplying No Discharge zones!

Getting Tanked
For the time being at least, we’re stuck with tanks in which we cart around gallons and gallons of feces and urine. When the holding tank fills up (and heaven help you if it is overfilled and blows a fitting!) you must find a pump-out station or venture at least three miles offshore (Great Lakes excepted) and dump it yourself.

The tank and its connecting plumbing—rigid or flexible—are therefore key to a tolerable installation.

The tank material of choice has rather quickly evolved to but one—rotationally molded linear polyethylene. It is light in weight, won’t corrode, inexpensive, and if thick enough, won’t allow odors to permeate. Construction is seamless. Threaded female fittings to accept male hose connectors are electronically welded to holes cut in the tank wall. Some companies will make up custom tanks with the number, type and location of fittings specified by the customer. Those sold through discount catalogs generally have the standard configuration—two large openings for 1-1/2″ sanitation hose, and one small opening for a 1/2″ vent line. Of the four brands tested here, two provided the male fittings, two did not.

In case you are curious about other materials, integral wood/fiberglass tanks are okay so long as there is sufficient glass covering to protect the wood and the finish—gelcoat or epoxy—is of good quality.

Fabric tanks, such as those made by Vetus and Nauta, are convenient because they can be mounted practically anywhere. They should, however, be laid on a soft bedding, such as foam, to prevent damage from chafe. And restraints must allow for their expansion and contraction. Based on our experience with them, however, leaks at the fittings may be a problem, so we do not recommend fabric tanks for use as holding tanks.

Aluminum is not a particularly good choice as sewage can cause it to corrode.

Stainless steel is a good holding tank material, but heavy, expensive, and not available off the shelf; you’ll probably have to find a local fabricator to make one up to your requirements.

The Test
We bought four polyethylene tanks to examine and pressure test. All are rectangular, though some of the companies offer other shapes, such as a V for fitting in the bow of some boats. The most commonly seen are from Todd Enterprises and Kracor, though SeaLand is now more widely seen in discount catalogs than it was seven years ago when we last tested holding tanks. The fourth is Ronco, whose tanks are not generally available through mail order catalogs but will make up custom tanks.

Holding tanks must satisfy US Coast Guard standards CFR 33 159.109 for pressure and CFR 33 159.111 for vacuum pulse. In the first, the tank must be subjected to “a pressure of 7 feet or to 150 percent of the maximum pressure specified by the manufacturer for operation of the tank, whichever is greater. The tank must hold the water at this pressure for one hour with no evidence of leaking.”

The second test requires 50 fillings of water at the same pressure head. Then it must be emptied by “a 45-gallon-per-minute or larger positive displacement pump that remains in operation 30 seconds after emptying the tank at the end of each cycle.”

Because the latter test was deemed too lengthy and therefore impractical, we focused on the pressure test. A 7-foot clear hose was fitted to each tank and filled—tank and hose—to capacity. If the water level in the hose fell, we knew we had a leak. Preventing threaded fittings from leaking was the hardest part of this test. Teflon tape was used with some success, though nylon fittings in polyethylene tank walls generally make for a tight fit. Still, you’d be surprised how much pressure is created with 7 feet of head.

Once the leaks were stopped and the water level stabilized, we waited the required one hour, watched the tank sides bulge, and then measured the amount of deflection. Wall thicknesses of the four tanks tested range from 1/4″ to 3/8″ thickness. As one would expect, the thicker the walls the less deflection.

Depending on which walls were measured, deflection ranged from abouat 1/8″ on the sides of the SeaLand to 3-1/2″ on the top of the Todd. Smaller side walls deflected less than tops and bottoms. This is not an unrealistic scenario. Should the tank vent line become plugged with sewage or toilet paper, repeated pumping of the toilet will increase pressure inside the tank…to the point of fomenting fitting failure. Phew. And the reverse—implosion—could happen at the pump-out station. (See next page for information on SeaLand’s holding tank relief valve, the Tank Saver.)

Results
Despite a good deal of fussing with fittings, we could not get any of the four tanks to hold 7 feet of head for one hour. The Ronco and Todd came close at 6-1/2′, though it must be pointed out that the Todd tank did not have an inspection port, a common source of leaks in the other three tanks. The SeaLand tank leaked at the inspection port, as in 1993, due to a tiny mold line (burr) in the plate that prevented a perfect seal of the O-ring. Seven years ago, trimming of the burr eventually enabled us to get 7 feet of head; not so this time around. The pinhole leak stopped when head fell to 5 feet. The Kracor tank leaked profusely with just 1 foot of head and couldn’t be coaxed to do better. As in 1993, the problem didn’t appear to be a burr in the plate molding, but deformation of the tank top that prevented the plate from sealing.

Other than the Kracor, we think we could have eventually gotten the other three tanks to hold 7 feet of head.

The Ronco deflected just 1/2″ on the sides, but some allowance must be made for its smaller size (17 gallons versus 20 gallons for the other three). Its 1/4″ wall thickness is the least of the group (same as Todd), so greater deflection could be expected in larger size tanks.

As it did in 1993, the Todd tank had the most deflection—7/8″ on each side and 1-3/4″ on the top and bottom (3-1/2″ combined). This tank did not have an inspection port, otherwise it probably would have leaked around that seal. Deck plates are options with Todd tanks.

We didn’t measure deflection of the Kracor because it leaked so quickly through the inspection port that the tank never had time to bulge.

Conclusion
All four tanks probably can be made to hold waste without leaking under pressure, but it may take some doing. Still, there are differences.

Todd is the least expensive; one reason is it doesn’t come with an inspection port standard, or threaded male hose fittings. Kracor does come with fittings but unless you buy a common size through a discount source, such as West Marine (800/262-8464), their prices are high. The 17-gal. Ronco tank performed well and seemed as well made as any of the others. We’re not sure if Ronco increases wall thickness in larger tanks, but you should ask if buying, say, a 25-gal. tank. SeaLand has the thickest walls—3/8″—and provides quality barbless hose fittings. A small but thoughtful bonus is the very low positioning of the lower drain fitting, which leaves virtually nothing in the tank. The Todd and Kracor have lips of about 3/4″; Ronco has clearly made an effort to minimize its—about 1/4″.

If you want the best, buy SeaLand. And if you purchase through Defender Industries (800/628-8225), SeaLand prices are quite reasonable. 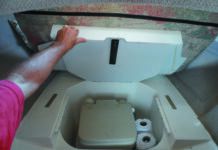