Portlight Gasket Source
In the November 1, 1991 issue we reported on the difficulties-and a few successes-wed experienced trying to find obscure parts for our C&C 33 test boat. We reported finding replacement gasket (or spline) material for the portlights from a Canadian company called Beclawat in Belleville, Ontario.

Recently we received the following note from Eric Spencer at Yachting Services, saying, At that time Beclawat had a large stock which has now been sold. Unfortunately, no one at Beclawat knew the source of the spline. Since we have a regular demand for the same spline from the owners of Tanzer sailboats, we have had a die made for this extrusion and can supply this spline. The price is a little higher than that mentioned in your article. I have since learned that ports made by Beclawat using the same spline were installed in some Grampians and some Mirages.

Mercer 44 Owners
Floyd Hollister would like to form an owners association for those fortunate few skippers of the Bill Tripp-designed Mercer 44. Contact Floyd Hollister at Suite 145, 1410 Forest Dr. #8, Annapolis, MD 21403-1442.

The Twin-Keeler
Craig Anderson and Brian Backstrand, editors of a new newsletter called Twin-Keeler, hope to promote interaction between owners of boats with what the British call bilge keels. These include the Alacrity and Vivacity, and much of the Westerly line, all able to stand upright on their keels at low tide. A complimentary issue will be sent to anyone who writes the editors at Twin-Keeler, 2943 W. Balmoral Ave., #2, Chicago, IL 60625. 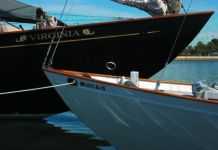