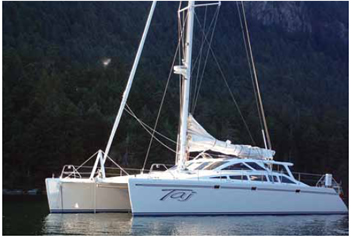 I am writing to give credit where it is certainly due to ScanMarine in Seattle (www.scanmarineusa.com), which sells some very fine boat heating products. Trying to heat a 48-foot custom sailing catamaran with its considerable internal volume is not a walk in the park. The first time through, I really didn’t get it right; this isn’t a mistake your wife will forgive if you’re cruising north of 48 North.

I was then lucky to have the input of Doug, Bruce, and Mike at ScanMarine. They came out to the boat more than once, checked out my installation, and worked with me for a long time to get it right—all without charge. In the end, I installed two new Wallas 40 Dt heaters with their guidance. It’s been a full season of trouble-free cruising to the Gulf islands and Desolation Sound with abundant, quiet, reliable heat. If heating your boat is of interest, you owe it to yourself to give them a call.

I want every reader to be aware of the excellent support available from Mermaid Manufacturing of Southwest Florida (www.mmair.com). I contacted them for help on an A/C unit that wasn’t operating correctly. They immediately looked up my serial number, determined there was warranty time left, and talked me through a basic diagnostic check. It was determined that I should send the unit in for overhaul and inspection. Mermaid totally overhauled the unit to new status and shipped the unit back, all in 10 days. Fantastic service. As I reinstalled the unit, I ran into an issue I created. The tech talked me through the problem in minutes. When it was all said and done, I had a new A/C unit and a happy crew, at no cost to me. I am now a Mermaid groupie.

Four or five years ago, we bought a set of Corelle dishes because they were microwavable, rugged, thin and light—perfect for a boat—and we liked the pattern. Although they are much stronger than other brands, all dishes are breakable when dropped. Three of our dishes eventually broke that way, and I called Corelle (www.corelle.com) to buy replacements since they were long out of warranty and that type of breakage was excluded anyway. The pleasant lady that took my call said that I didn’t have to buy them, that they would replace them free (including shipping), and that the receipt being lost was no problem. Great product, great service.

I decided to buy the Midland WR-300 weather radio because of its alarm feature that could even wake us in the middle of the night. The problem was that the radio did not receive and provide alerts. I called Midland tech support (www.midlandradio.com), but after being on hold for 25 minutes, I gave up. I later called the company back to let them know there may be a problem with their tech support line and that I was frustrated. I was switched to sales (which answered promptly) and then to Stuart Barber’s voicemail. He quickly called me back and tried to get me through to tech support, but they were simply swamped. Instead of just telling me to try back and after prefacing that he was not a tech support person, Stuart explained that he owned the same radio and would try to help me.

We spent a lot of time going through possible fixes, without success, so he said he’d track down an engineer who would call me back with instructions on how to do a factory reset of the radio. The engineer never called.

I thought I was out of luck, but a few days later, Stuart called to followup. Learning that I had not gotten a call, he forwarded the reset instructions the engineer had emailed him. The reset did the trick, and the radio works like a champ! Even after the considerable time he had already spent with me, Stuart once again followed up to make sure the radio was working properly.

The part of the story I have left out up to this point is that Stuart is the busy director of sales. It is gratifying to know that Midland has management that will spend that kind of time to ensure the satisfaction of the individual customer.