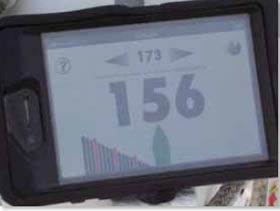 Two racing sailors from Charleston, S.C., got together last spring to develop an economical alternative to electronic compass devices like the $340 to $500 Velocitek (PS, May and September 2011), the $460 to $735 Tacktick (PS, November 2009), and the $600 Sailcomp. The result? The Regatta Recon performance sailing app for Android and iOS devices.

The app will work with any smart phone or digital tablet so long as the device already has an internal compass. Whats important to note for racing sailors is that Regatta Recon doesn’t require any Internet or mobile connection once it has been downloaded, so it wont put you in jeopardy of transgressing race rules prohibiting outside interference.

Regatta Recon offers three essential functions: compass heading and directional trend, countdown timing, and the ability to log the elapsed finish times of up to six competitors. For short-course racing sailors, it offers three pieces of vital information. It displays boat heading as well as the degree of lift or header that the boat is experiencing relative to that initial number. With a simple touch of the screen, the user can switch to a countdown timer with six settings from one to six minutes; the timer alerts users at specific intervals with an audible tone. Regatta Recon can be downloaded from iTunes App Store or from Google Play for $14.99.

Practical Sailor downloaded Regatta Recon to an Apple iPhone 4 and took it for a test drive. While underway, PS compared Regatta Recons readouts with those generated by a handheld GPS. The apps accuracy appeared to be spot-on, and its responsiveness to changes in heading was nearly instantaneous. (The device displays every integer-one at a time-as the boat moves from one heading to the next, so a swing from a heading of 245 degrees to 270, for instance, wont show the final heading until each of the numbers in between have flashed on and off screen.) Switching from countdown timer to compass heading required just one touch of the screen.

PS tested the app in both overcast and bright daylight conditions, and we found the display to be clearly visible on the iPhone, even at a distance of 20 feet. (One caveat: Screen visibility on smart phones and tablets depends principally upon the devices brightness settings and the reflectance qualities of the screen/its case.) Regatta Recon creators recommend adjusting your devices sleep settings so that the screen wont go dark while in use. And, of course, youll have to ensure that the devices battery has enough charge to last throughout the anticipated time of use on board.

If you plan to use Regatta Recon or a similar app, we recommend investing in a quality waterproof case or drybag for your phone or tablet. We used a water-resistant Otterbox Defender case during tests, but for boats shorter than 30 feet or during wet races, a waterproof case is a better option. The top picks in our November 2012 test were the Lifeproof iPhone and iPad cases and the Aquapac for iPad bag. (Stay tuned for an update to that test this spring.)

For best results, the device also should be mounted close to the boats centerline yet still be visible from the helm. The creators say theyre in the final stages of developing a mast-mount coupling that will be compatible with any bracket designed for the Tacktick Microcompass, the Raymarine Micronet RaceMaster, or the Velocitek ProStart.

Our tester found this app simple to download, responsive, and easy to operate. Unlike digital compass products like Tacktick and Velocitek, Regatta Recon does not indicate boat speed, but its otherwise an inexpensive and functional alternative to the digital compass gear. Keep in mind when using it that many iPads and iPhones will overheat and shut down if left in direct sun too long.