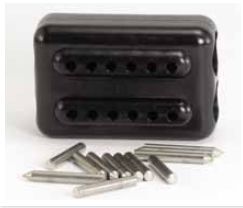 Rope splicing is a sailorly art form that has many boaters scared skinny. They havent learned the skill, and they fear that using a knot instead displays their ignorance and is perhaps less secure. The EZ Splice (www.ezspliceusa.com) promises a means of splicing a rope in minutes without any special skill. The lines are trimmed to length, inserted into the EZ Splices tough plastic housing with just a little tail sticking out, and 12 stainless pins are pounded in with a hammer. We found it to be fast and easy, and the result was a consistently neat splice. But the million-dollar question remained: How secure was it?

Practical Sailor tested the smaller EZ Splice on half-inch polyester double-braid (10,100-pound breaking strength), both as a straight splice and as an eye splice. As a straight splice, it held 1,900 pounds before the EZ Splices pins pulled through and 3,650 pounds as an eye splice, or 19 percent and 36 percent of line strength, respectively. For comparison, a double fishermans bend knot will hold 70 percent of line strength as a straight join, and a bowline will hold 75 percent as an eye splice. Knots are two to three times stronger than the EZ Splice proved to be in our tests. Wed expect that the result using nylon line would be slightly lower since nylon stretches, resulting in less even distribution of load between the pins.

So what are the applications of such a gadget? The company website abounds with applications, some of them practical, but all of them reproducible with knots. The EZ Splice is certainly strong enough to secure a small boat in a well-protected harbor to the pilings, as well as many of the other suggested applications that are generally low-load oriented. In fact, EZ Splice is very likely as strong as a knot in the lowest-quality ropes, but they are discount-store products that we would not recommend for marine use.

According to Stan Synkoski of EZ-Splice, our results were dramatically different from the companys own tests and those conducted by EZ-Splice retailers and distributors. Synkoskis concern was how PS constructed the splice; he said all pins must be inserted from the front to rear end of the splice and fully hammered in, so the pin is flush with the splice. Our splices were made according to these instructions.

Bottom line: It didnt stand up to the loads often imposed on splices.