We’ve never been entirely satisfied with dry chemical fire extinguishers for marine use. We’ve used them on petroleum and electrical fires in refinery settings, and while they put fires out fast, the smoke cloud is choking, even in open spaces, complicating efforts to determine if the fire is truly out. If there is hot metal or embers, the fire can reignite. Electrical equipment is generally ruined and substantial clean-up is required.

In “New Marine Fire Prevention Tools,” Practical Sailor April 2020, we investigated pyrotechnic extinguishers, found a lot to like, but also important shortcomings. Now we investigate water—not buckets from the ocean, but deionized water in the form of a very fine mist.

Dumping water on a fire seems pretty low tech, but water mist extinguishers deliver a few interesting twists. Because deionized water is non-conductive, in addition to the common A rating (fires involving wood, paper, cloth, trash, plastics, etc.), water-mist extinguishers can carry a C rating (electrical). The fumes are not a breathing hazard in the cabin.

Deionized water is non-corrosive to most equipment, and because the water is dispensed efficiently, there is little water damage. They were first developed for hospital environments to be safe around patients and expensive equipment, but common applications now include valuable books, documents, telecommunication facilities, and specialized “clean room” manufacturing facilities.

The fine mist is effective at cooling wood and fiberglass fires, while the steam excludes oxygen. The smoke clears almost instantly and does not contribute to breathing problems, as dry chemical, clean agents (Halon replacements), and CO2 will. A mist extinguisher is 2-3 times heavier than a dry chemical extinguisher with the same Class A rating.

Spraying water on a fire seems pretty crude, but having a water-mist extinguishers (Class A:C) presents a few interesting advantages. Before jumping on the water-beats-fire bandwagon, it’s important to understand the types of fires likely to occur on a cruising sailboat.

(The extinguisher would also be rated non-conductive due to the C rating).

Class C: Electrical Fires, Energized electrical equipment fires (anything that is plugged in) 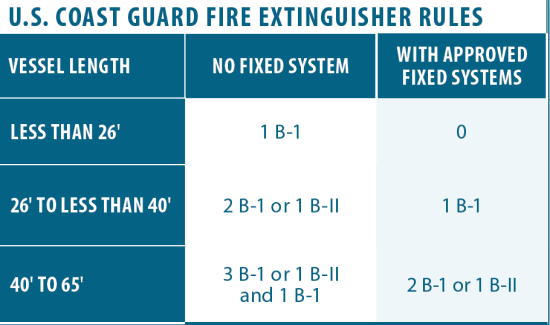 They are not as effective on Class B (liquid fuel) fires and are not rated for them. Although the mist does not spread the fire to the same extent that a deluge of water can, if the fuel is hot, the water mist can increase evaporation of the fuel through a process known as steam stripping, increasing the amount of evaporated fuel vapor and spreading the fire vertically. They can still put the fire out, but not as quickly as traditional Class B dry chemical agents. We can’t recommend them for this purpose.

Amerex portable extinguishers are filled with deionized water and are pressurized to 100 psi with nitrogen. The 2.5 gallon model will discharge for 70-80 seconds, which is about 4-6 times longer than a dry chemical fire extinguisher of similar Class A rating.

The longer active period comes in handy if you need to chase the fire around a bit. Unlike building fires where the plan is to blast and run or fetch another extinguisher, the off-shore sailor needs to be sure the fire is out. See also “On-Board Fire Fighting,” Practical Sailor, June 2017.