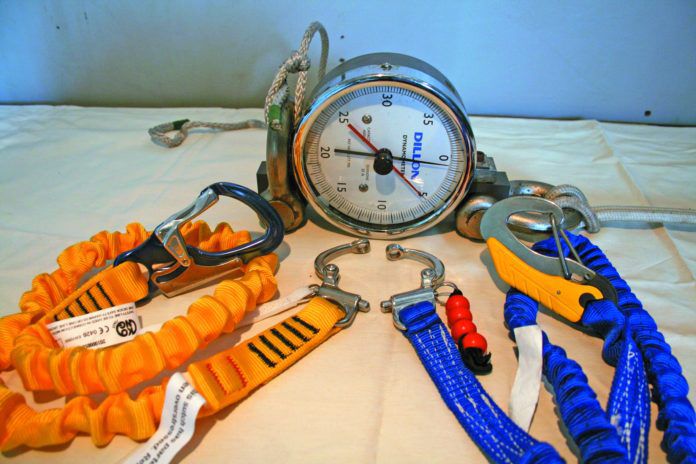 Just as we were wrapping up the report in our December 2017 issue describing how to make your own safety tether, 60-year-old British sailor Simon Speirs went overboard and died during the Clipper Round the World Race in an accident linked to a tether safety clip failure. The race, which charges tens of thousands of dollars for non-professional sailors to race with pro skippers, was already under scrutiny after two deaths in the previous running (see Risk Management and Renting Adventure, PS January 2017).

Regarding the most recent incident, Robin Knox-Johnston, noted offshore sailor and the Clipper Race founder and chairman, was reported saying that the tether failed in some form or another. He later clarified for us that the failure was at the tether clip-the snap hook that attaches the safety tether to the boat. He would offer no other details, citing an ongoing investigation by Great Britain’s Marine Accident Investigation Board. The last Clipper MAIB report, which examined the causes of the two fatalities in the last Clipper race, took 17 months.

“The reason why the clip failed is under investigation, and I am not going to anticipate the findings as that could be misleadingand not do yachtsmen any favours,” Knox-Johnston wrote in an e-mail to Practical Sailor.

Based on what we’ve learned and been told by others close to the race, the snap-hook was a Spinlock Deckware Race Safety Clip (# DWSTRCLIP), a double-action, locking snap-hook used in Spinlock Deckware Safety Tethers (# DWSTR). Introduced in 2009, the Deckware snap-hook is based on the Gibb safety snap-hook-a design that has been used in a variety of sailing tethers for more than three decades. In past tests,Practical Sailor has noted it is one of the easiest locking snap hooks for people with weak hands to operate. The chief difference between the Deckware clip and the original Gibb version is that Deckware clip is lighter and has a black plastic locking lever, while the locking lever in the original Gibb snap-hookis made of stainless steel.

According to Knox-Johnston, as a precaution, all Clipper racers have now switched to a different make tether with a different safety clip. Although he did not disclose the brand of the new locking snap-hook, media photos show competitors wearing tethers with what appear to be Gibb-style safety snap-hooks, featuring the stainless steel locking gate. (Some of the clips bear the Spinlock brand; these are presumably Spinlocks Classic Safety Clips, which are virtually identical to the original Gibb and preceded the current Deckware line of safety gear.) [Editors note 12.31.2017: We were told that Clipper Racers have gone back to using Spinlock Deckware Safety Tether clips again, with some warnings regarding their use-see “Tether Clip Update“.]

Practical Sailor is currently undertaking an investigation of the most common safety tether snap-hooks used by sailors and will be providing additional information as we become of aware of it. If you follow all of the links in this article (and the links within in those articles) you will have a mountain of information on safety gear and more than enough information to make an informed safety tether choice. We’ve tried to make most of these articles publicly accessible, but some are accessible only tosubscribers.

Except for the fact that the Clipper Race has halted the use of the Deckware Race Safety Clips aboard its boats, we have no evidence that they pose any more risk than similar designs. We will be looking into this further. (See point #6 below.)

It was not a normal failure of a perfectly good tether, but it would be unwise to speculate until the Government (MAIB) have completed their report,” said Knox-Johnston. It has been made clear that, from the initial examination, neither the casualty nor Clipper were at fault.

In addition to testing the approved locking snap-hooks on the market-including the Kong Tango, the Gibb, the Spinlock, the Wichard Proline, and Wichard locking snap-hook-we are surveying sailors who use them. If you know of any cases of a tether snap-hook bending or failing, or want to suggest a locking snap-hook for us to test, wed like to hear about it via email at practicalsailor@belvoir.com.

The accident offers another reason for sailors to familiarize themselves with the care and use of their inflatable lifejacket (PFD)/harness/tether combination. As weve found through more than a dozen separate tests in the past decade, this gear is more complicated than it may at first appear. If the equipment not well maintained, or not used as designed, it can put the sailor at unnecessary risk.

To help guide your safety gear check-up we offer the following guidance presented by safety experts who investigated the capsize ofRambler 100 capsize in August 2011.It is amplified with theadvice of other safety experts who participated in the 2011 Wing Nuts capsize whom we consulted for this report.

1. Harnesses or combination inflatable PFD/harnesses should be either on a person, hooked to your bunk, or otherwise immediately available at all times.

2. Inspect your inflatable PFD/harness every time you put it on and self-test your inflatable at least yearly for leaks. Typically this means inflating the lifejacket and leaving overnight and noting any significant loss of air.

3. Jacklines and fixed points for clipping in should be oriented so that it is nearly impossible for you to go overboard while clipped in. They should be consistent with the tether makers guidance for use with their safety tethers. The manual for the Spinlock Deckware Safety Tether shows only two types of clip-in points-a tether jackline and a folding padeye. Here are more tips on jackline installation.

4. The hook used for connecting to jacklines and fixed points on deck should be a locking type designed for that purpose that cannot self-release. Tests have shown that non-locking types can self-release from fixed padeyes.

5. The attachment at the harness end of tether is much debated. You have three options, a snap-hook of the types shown here, a cow-hitch or knot, or a snap-shackle. We recommend a top quality, non-swiveling, snap-shackle as the harness clip because it is the only clip that can be released under light to moderate loads (less than about 350 pounds). The pull-to-release lanyard must have a strong attachment point; beware of cheap split-rings that will bend under load. And know that under heavy loads, you may not be able to release it. Many racers prefer one of the snap-hooks used for deck attachment featured here (the Clipper racers use snap hooks), or even the cow-hitch (while some offshore racers prefer this option it is our last preference for cruisers; note also that one company, Glowfast offers a releaseable cow-hitch design). Pros and cons of each of the three main options are discussed in more detail in the December 2017 article on building your own tether.

6. The tether snap-hook, at the boat-end of the tether, should be attached to a jackline or padeye designated for that purpose. Our preliminary analysis indicate that some snap-hook designs, especially the flat plate models based on the Gibb style, can be prone to bending if loaded from the side, or at an angle. If your safety clip or jackline attachment point might cause the hook to jam in a way that prevents the hook from aligning with the load, you should consider changing this arrangement. (Examples of potential jam points would be a cleat, slotted aluminum toerail, or stanchion base.) Also beware of obstacles along the path of the jackline that might cause the hook to snag and become loaded from the side.

8. Know how to orally inflate and manually deflate your inflatable PFD.

9. Wear crotch/thigh straps, especially when embarking on an offshore passage. Know how to deploy and use your spray hood, a key item in big seas.

10. Upgrade your whistle. The Fox whistle did best in our emergency whistle test. Past accident reports have determined that the integral whistles on many PFD/harnesses are useless.

11. The sensors on automatic PFD strobe lights must be in the water to work and many are dim. Keep a dedicated MOB strobe on your person at night. We recently tested the best strobes on the market.

12. Carry a sharp knife or cutting tool for cutting the tether if needed. Quick-release snap-shackles can be impossible release under load. Weve carried out a number of knife tests that hightlight some of our favorite brands.

13. Practice releasing your tethers quick-release mechanism while your harness/PFD is inflated, since the inflated PFD can conceal the lanyard on some designs. The pull-to-release lanyard on your snap shackle should be on the side of your strongest arm/hand.

14. Some tethers have two legs for attaching to the boat, typically one short and one long. Never attach the snap-hook at the end of the unused boat-end tether to the harness. If you do this, you will have to release two clips-at least one of which that won’t release under load-if you need to detach yourself from the boat in an emergency. The tether should attach to the harness at only one point so that it can be quickly detached in an emergency.

15. Personal locator beacons (PLBs), whistles, AIS man overboard distress signals, and distress lights that are worn at all times can be lifesavers.

16. Know your PFD harnesses maintenance schedule and strictly adhere to it. Make sure it is completely empty of air before repacking. We recently shared some basic tips on testing and maintaining PFD/harnesses.

For more articles on choosing, using, and maintaining personal safety equipment for sailing, you use the Google-powered “Custom Search” box on the Practical Sailor website. Another option is to download all our MOB-related equipment tests in one click by purshasing the digital eBook: Man Overboard Prevention and Recovery, a staff-edited anthology presented in digital PDF format for downloading, saving, and printing at home or on the boat. This book and other sailing related books-both print and digital format- are available in our online bookstore.