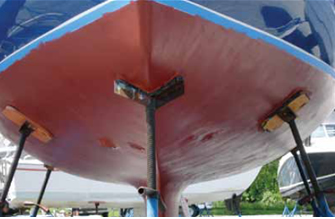 I thought you might like to know of a dinghy-wheel manufacturer that I came across that wasn’t included in your last evaluation (PS, October 2011). Beachmaster boat wheels (www.beachmaster.co.nz) appear to be very well designed and tuck in nicely behind the transom when in the retracted position, eliminating the windage issue of some other designs.

In regard to your iPad apps article in the March 2012 issue: We love our iPad, but when I take it outside, it has the most terrible screen for outdoor viewing I’ve ever seen. (Yes, I’ve got it landscaped.) We even added an antiglare film! What am I missing here?

From what I see, this thing is unacceptable for outside viewing.

We had the same issue—apparently so did many people, and Apple took notice. The company’s newest iterations—the iPad 3 and the upcoming iPad 4—were designed with retina display screens, which are supposed to be easier to read in sunlight.

In reference to your February 2012 article on holding tank additives: We had previously used Odorlos on another boat with good effect, but in our new-to-us boat, persistent odors continued to emanate, even with regular use of Odorlos and frequent flushing of the tank. In spring 2010, we began using NoFlex Digestor to tackle the problem. After 1½ years of regular application, it has greatly improved the “health”of the tank and reduced odors that had lingered. It also does a good job of cleaning the bowl and hoses. The company is based in Burlington, Ontario; the product page on the website is: http://www.jetvac.ca/category/noflex-digestor.html. We found it locally at Steveston Marine in Vancouver, B.C.

We’ve added the NoFlex to the followup test roster.

I have a Racor fuel/water separator Model S3240 mounted on my RIB dinghy. The problem is that the bowl sticks to the filter. I tried coating the filter threads with grease, TefGel, and silicone, and nothing seemed to prevent the seizing. Tired of purchasing a new bowl every time I changed the filter, I contacted Racor. It seems they are aware of the problem and are in the process of designing a new filter. In the meantime, they offered to send me a new filter and bowl at no charge.

Perhaps some of your readers are experiencing the same problem, and they should know that they can contact Racor about it.

I am writing to encourage Practical Sailor to consider sponsoring a series of workshops on topics such as painting, engine maintenance, and electrical wiring—I am sure many PS readers would greatly appreciate attending. Many of us have proficiencies in areas other than boat building, electronics, diesel engine systems, and weather forecasting. I am also confident that we all do not learn from just reading and that many of us learn best from hands-on, instructor-led training.

After carefully reading Interlux’s boat painting guides (www.yacht paint.com) and watching application videos, I worked all weekend, preparing and painting the bottom of my boat. The end result? I am very disappointed. I have far less than the nice, smooth bottom I was striving for.

I am sure lots of boaters have had the same frustrating experience and would welcome the opportunity to attend a PS hands-on workshop.

Unfortunately, we’re net set up for that sort of thing. However, PS editors sometimes lead non-PS sponsored seminars on a variety of topics, including Technical Editor Ralph Naranjo’s seminar on safety at sea. Groups interested in hosting one of these can email practicalsailor@belvoirpubs.com. In regard to your bottom paint: Smooth bottoms are a result of painstaking prep work. Check out the February 2012 PS Advisor for some tested advice.

I would like to congratulate you on your article on anchor rode tensions (PS, March 2012), which uncovered new findings relative to loads at different scopes. Snatch loads have been a part of Creative Marine’s protection scheme for years, but they have never been proven in tests before.

Until now, they have been theoretical as determined by author and sailor Earl Hinz, and his work depended on momentum caused by the displacement of the vessel. His theory was that at the “snatch,” the strain on the anchor rode would double over the strain on the rode, if the snatch did not occur. Hence, the call for snubbers or an all-nylon rode, which through its stretching would obviate any snatch.

It was also good of you to recognize that the new anchors “dive,” whereas older, traditional anchors “plow” the bottom when overstressed. However, you failed to mention the Max and Super Max anchors in your listing of diving anchors. The Max and Super Max anchors, which we sell at Creative Marine, were the first penetrating anchors available and the first to have a concave fluke. They have the largest fluke area, so when they penetrate a bottom, their holding is obviously greater than those pointy, concave anchors with smaller fluke areas.

Regarding the PS blog post on small boats with full-batten mainsails and friction: The friction problem with many small boat mainsails is greatly aggravated by the track style on the mast. Tracks that take a barrel-shaped slide are the worst for jamming! These are actually designed to take a bolt rope, not slides, but they have become ubiquitous on smaller spars. I find that the best, and least expensive, solution is to use all plastic slides and plenty of dry Teflon lubricant.

Bainbridge sells a very strong, slippery slide called an Allslip slide (No. A118 for ½-inch groove). We use these at the front of the full battens. Between the battens, on mainsails 150 square feet or less, we use the Bainbridge No. A018 slides. In any case, plenty of dry Teflon lube will help.

In reference to the reader letter on chafe protection that was published in the June 2012 Mailport: This is one reason the boat yard we use (Burr Brothers Boats) offers stainless-steel pendants in addition to the generous-sized regular pendants during hurricane season. During Hurricane Irene in 2011, Burr Brothers lost no boats, where other mooring fields did have boats break free.

After the hurricane, we noticed some varnish wore through under the chock on the side of our boat with the nylon pendant (and made a minor cut in the pendant), but there was no damage on the side with the stainless pendant (it’s very stiff and stands out from the chock). Great service from the boat yard!

When I heard of an unfortunate happening during an evening race on Long Island Sound where a crew member who was not wearing a PFD was knocked overboard in the dark and almost did not survive, I decided to check my inflatable PFDs to be sure they were working properly.

I have one inflatable “SOS” (Sospenders brand, model B718CS-60) PFD that I keep on board as a spare, and I check the CO2 cartridge at the beginning of each season. It is then stored in a plastic bag to be used as a spare. When I checked it this time, I found that the cartridge had fired. I was about to replace the cartridge when the thought occurred to me, “Why hadn’t the unit inflated?”

The Velcro used to keep it folded was still in the sealed position. I unfolded it and tried to inflate the PFD by blowing into the manual oral inflation tube, but the PFD’s bladder never filled. Upon inspection, I discovered that the inflation tube had never been fastened to the bladder. I took the PFD to a local plastics design engineer to confirm my observation. He said the tube did not show any evidence of ever having been cemented or heat-sealed to the bladder.

Since Sospenders was acquired by Stearns in 2004, a subsidiary of parent company The Outdoor Co., I contacted Stearns to report the problem and request a replacement. I was told that since the PFD was made prior to the acquisition and was now out of warranty, Stearns would sell me a PFD for the list price minus 20 percent. Their offer was not acceptable, in my opinion. If I was looking for a bargain, I could go online and buy a PFD for less than their offer. Yes, the PFD is many years past the warranty period — however — since the PFD was never used and the defect is not due to age or use, but due to an obvious manufacturing defect, I felt I had the right to expect it to work.

Stearns also informed me that the PFDs should be returned to the company every two or three years for re-certification (if they are USCG certified). I have not been able to find notice of this in any instruction manual, and I doubt any other PS readers are aware of this.

It is fortunate that this PFD was never needed in an emergency, or the results could have been tragic. I wanted to share my experience and to urge other owners of inflatable PFDs to test them using the oral inflation tube.

Your experience is another great reminder that inflatable PFDs should be inspected frequently and regularly. Some makers recommend inspecting them each time you leave the dock. Users should check that the CO2 cartridge, bobbin, and hydrostatic release are in order and that the life jacket can be manually and orally inflated.

In regards to the reader letter on getting U.S. Coast Guard documentation for a potential new boat in the June 2012 issue, I just wanted to add that when purchasing a pre-owned boat (or getting one financed through a lender), you should always order an abstract of title through the National Vessel Documentation Center (800/799-8362), even if the boat is not currently U.S. Coast Guard documented.

The abstract provides ownership history and any outstanding liens or loans against the vessel. Those liens or loans should be satisfied prior to or at the time of purchase, and proper releases or satisfactions should be filed. This is a step that sometimes is overlooked but very important.

The Rambler 100 article (PS, May 2012) and US Sailing report state that the boat’s can’ting keel fell off. Keels are not supposed to fall off. Since it did, and it doesn’t look like the keel struck anything, something was wrong with the boat design. I would have liked to have seen a discussion on the engineering causes of the keel failure and recommendations on preventing it.

The keel failure’s cause is still under investigation, and at press time, the official report had not yet been released. However, a Practical Sailor article on keel design, in general, is in the works. Stay tuned.

The June 2012 issue of Practical Sailor has a photo of the Coast Guard bark Eagle and a cargo plane, incorrectly called a C-130. The airplane in the photo is a twin turboprop, whereas a C-130 has four engines. (I spent many hours on them as a Flight Surgeon in the U.S. Air Force.) I believe the aircraft in the picture is an HC-144A Ocean Sentry.

Where Credit is Due