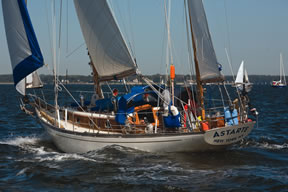 In regards to the February and March 2011 electric heads reviews: While new macerator heads have some good features, this practical sailor is happy using a 45-year-old Wilcox-Crittenden Junior 52 head with bronze parts. It works very reliably aboard our 1964 Rhodes Reliant, but it has required a few minor modifications over the years:

• The original brass studs that hold the bowl down were vulnerable to decay; it was simple to replace them with bronze studs.

• The valve at the bottom of the bowl seals against a brass ring vulcanized to the underside of a neoprene gasket. The brass ring deteriorated and failed to seal well. I had a 1/8-inch bronze plate machined to fit between neoprene gaskets with a discharge hole the correct size to provide the sealing lip the bottom valve needed.

• The primary malfunction of the head is when small “matter” gets stuck between the valve and its bronze seat. Sewage gets pumped up into the bowl and won’t go out. The solution was to make a special tool—a plastic rod that was heated and bent into a flat right angle at the bottom—to use to dislodge the small matter under the lip of the bronze hole.

Our holding tank also has some very practical features to ensure there are no head odors. Following Peggie Hall’s advice in “Get Rid of Boat Odors,” we have a good venting system to keep the tank aerobic: two 1-inch vents, one with a cowl ventilator to push fresh air in and the other with a solar-charged exhaust fan. We also use Odorlos Holding Tank treatment, and the holding tank has its own dedicated deck-wash pump that is plumbed to the bottom of the tank, so then when we are 3 miles out, we can flush the tank after discharging it.

Your article on anchor lockers (PS, March 2011) reminded me of the anchor-locker drainage problems on our 1979 Endeavor 37. The drain would clog with leaves and fill up with rainwater. I tried, without success, to push a wire through to clear it. This brings me to my main squawk: cockpit and anchor drains. I think that any boat drain should be able to be cleared by using a probe through both the intake (inside) and outlet orifices. But all of the drains I’ve seen have some type of blockage—right-angle turns, blunt-ended fittings that block the probe, or some other frustration. I think there should be some safety standard to correct this problem.

The American Boat and Yacht Council, which develops safety standards for recreational boats, has an entire chapter (H-4) devoted to cockpit drainage systems. However, the standards have no specific language on whether a design should accommodate clearing clogs with a probe. One scupper-clearing method that’s worked for us in the past is using a toilet plunger. If there’s standing water in the cockpit/locker due to a clog, the plunger’s the way to go. Making sure the drains have proper drain covers or grates also helps keep them free of debris; however, this will also affect their evacuating flow.

In regard to your most recent issue dealing with wood finishes (January 2011): I know Deks Olje to be a well-used and highly recommended product, and it is readily available from many chandleries. I used it for the first time last summer, and thus far—after a bad Seattle winter—it is doing very well. The criticisms I found online said bad results were due to incorrect application. I found that saturating the wood with the Part A (eight to 10 coats) prior to applying Part B (six coats) seemed to do the trick. I will be applying another coat or two of the Part B gloss this summer to make sure it lasts as long as possible.

Thanks for the field report. The Deks Olje (1 and 2)-coated test panel in our long-term wood-finishes test had Good coating integrity and color retention after one year of weather exposure, but the coating failed at the 18-month mark, showing signs of aging including a dry-skin look. Anyone who uses Deks should plan to apply a maintenance coat at least once a year, before the coating starts to show signs of weathering.

In regard to a reader letter (March 2011) on wind generators in high winds: I sailed around the world in just over six years with a Four Winds (www.fourwinds-ii.com), two-blade, high-output wind generator and found it to be as close to perfect as possible. It was almost noiseless in winds up to 40 knots. I did not tie the Four Winds down unless we were at a marina with shorepower available. It operated well at all wind speeds at sea, including several days in the Pacific with a constant 30 knots gusting to 45. The high-wind, blade-feathering feature allowed it (and us) to survive two hours of winds gusting over 90 knots while we were tied up to some very shaky docks in Southern Italy. I wish I’d had the time to check the power output, as it probably would have lit New York.

Dolphin Spirit has 2,000 amp hours of house batteries installed, and the Four Winds’ constant operation meant that I ran our 8-kilowatt genset for only an hour a day to charge batteries, make water, and bring down the refrigeration.

In your response to a reader inquiry (March 2011) on the pros and cons of various dinghy types, you left out one that is a viable option for many of us with “classic plastic” boats: the Porta-Bote (www.portabote.com). It is very easy to fold up and store along the lifelines, yet very stable, and functional. I used one for a number of years when I lived in Monterey, Calif., and had a mooring in the outer harbor.

Practical Sailor reviewed the Porta-Bote back in the Nov. 1, 1998 issue. Testers found it to be a nimble boat with good handling and a relatively low price, when compared to an inflatable dinghy. We’d like to hear from other readers about their top tender picks. To put in your 2 cents, visit www.practical-sailor.com, and fill out the short online Dinghy Survey, which appears under the “Resources”.

As you pointed out in your March 2011 article on handheld vacs, a lot of boats have inverters. Having used many 12-volt vacs and some with 110-volt chargers, I don’t think you can beat a 1-gallon portable ShopVac (www.shopvac.com). I have kept one aboard for 10 years now, and it is very compact. I use it to empty the last drop of water in the bilge as well as for ordinary housekeeping and maintenance projects, and I never have to worry about a charged battery. I think that the wet vac feature on a boat is essential.

Regarding handheld and cordless vacs (March 2011): A model I can highly recommend is an Oreck 12-volt handheld (www.oreck.com). It pretty much resembles the Black & Decker PAV1200W (www.blackanddecker.com) you reviewed. It’s extremely powerful and well-designed. The fixed snout does cause some problems in tight spaces, but its power is such that it often makes up for its lack of reach with sheer suction. Unfortunately, they’ve since discontinued this model, but a search in the usual venues may yield an example of the type I’m describing. It’s a very good unit, and worth seeking out.

When I worked in a marina, I was often called the “head mechanic,” although I wasn’t the guy in charge and many of my co-workers refused to shake my hand. Of the many systems I worked on, in that capacity, I thought the best was the Dometic VacuFlush (www.sealandtechnology.com), which I believe is used on commercial aircraft. Why wasn’t it included in your February and March 2011 reviews of electric-flush heads?

The VacuFlush is so different from the other units, we decided to review it separately. The unit is highly regarded among builders of high-end yachts and uses very little water. Both Bill Seifert (yacht builder, offshore sailor, and delivery captain) and PS Technical Editor Ralph Naranjo have praised the system’s efficiency, with some caveats. Look for a review of the VacuFlush and Dometic’s new SailVac holding tank in an upcoming issue.

In your response to a reader in the April 2011 Mailport, you suggest that the installation of a “solenoid valve” in a freshwater supply line for an electric head is adequate for reduced pressure zone (backflow) prevention. Thirty five years in the plumbing industry, along with state certification in reduced pressure zone inspection, tells me that your suggestion is potentially hazardous to the health of the boat owner. Should the solenoid valve stick in the open position, contaminated water will “back up” into the freshwater system. All installations of this type must be installed with proper backflow prevention devices and should be installed by someone knowledgeable in the profession.

Excellent points. The solenoid valve, which in some systems prevents backflow from the toilet into the potable water supply, does need a backup. Raritan, which makes the toilet in question, uses a vacuum breaker to prevent backflow in case the solenoid (which controls freshwater flow into the toilet) fails. If in doubt regarding proper installation, it makes good sense to turn to a pro.

I was a little surprised by a reader’s comments in the January 2011 Mailport about the November 2010 pressure cookers article. I presume that the reader’s concern is about safety, but I can’t say that I share it. We have sailed much of our 45,000 miles practically living out of a Lagostina pressure cooker (www.lagostinaworld.com). We don’t have problems with the stability of the stove due to rolling, and I feel happier with the sealed pressure cooker there than with a saucepan that could spill.

The impetus behind port-side galleys (PS Advisor, February 2011) was J/Boats’ design for the J/44, which was purpose-built for the Bermuda Race. The Bermuda Race is predominantly a starboard-tack race due to the sea breeze, so the designers made the boat with both heads and the galley to port and the navigation station to starboard so that the navigator didn’t have to lean on the breaker panel.

The column labeled “Rating SRQ” in the bottom paint tables on pages 10 and 11 of the March 2011 issue of Practical Sailor referred to the paint panel set that is being tested in Sarasota, Fla.

Reader Workbench
Where Credit Is Due