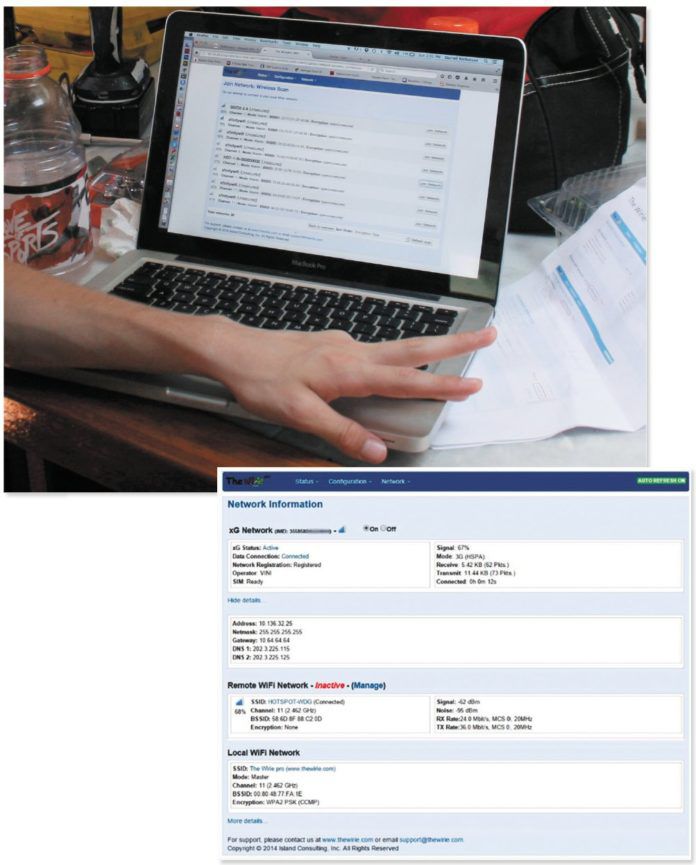 [Editor’s note: This review refers to the Wirie and WiriePro, both of which are no longer in production, or supported by the manufacturer.]

As high-speed, broadband cellular coverage extends throughout the coastal U.S. and abroad, the need for a Wi-Fi connection to a shore-based network is less vital than it used to be. But when PSs crew visited Cuba recently, logging onto the Marina Hemingways Wi-Fi network was our still our easiest link to the outside world.

Editor’s Note: This product is a legacy item and the manufacturer is no longer in business.

Every sailor knows that VHF radio range is dependent upon a good-quality antenna mounted as high as possible (see 3dB VHF Antenna Test, PS February 2007 online). Connecting with a Wi-Fi network ashore is no different. Logging on to locally available networks becomes much easier with a booster/ antenna that strengthens your signal and extends the range of reception. The difference between the two is that Wi-Fi output is more tightly restricted, so range will always be less than a few miles over water. Adding high-speed cellular coverage can extend this range significantly.

Plug Wi-Fi into the search box on Practical Sailors website, and youll see a number of articles dating back to 2009 on Wi-Fi boosters and antennas. These range from do-it-yourself solutions costing less than $200 (An Experiment in Boosting Wi-Fi the DIY Way, PS April 2014) to our recent report comparing the performance of a cellular hotspot (2G/3G/4G/LTE) to that of a Wi-Fi booster (Wi-Fi Booster Versus 4G Cell Data, PS June 2016). These reports also address the variety of antennas available, ranging from unidirectional antennas that target specific Wi-Fi networks at a great distance but wont work on a rocking boat, to the more practical omnidirectional antenna that most cruisers opt for.

One of the first Wi-Fi boosters on the scene before the recent explosion in the marine-grade Wi-Fi antenna/boosters, was The Wirie, developed by Mark Kilty and Liesbet Collaert while cruising aboard their 35-foot Fountaine Pajot Tobago, Irie. The all-in-one antenna/booster package is bulky compared to modular designs that locate some components belowdeck, but weve had a mostly good experience with The Wirie line of products (see Details Distinguish the Best Wi-Fi Antenna for a Sailboat, PS April 2010, and Long-term Gear Updates, PS March 2016). This experience-though not trouble-free-and the addition of several enticing features, compelled us to try the companys newest product, The WiriePro ($700).

The fact that Wirie has been around so long is reassuring. Others, such as the 5MileWi-Fi we tested in 2010, have come and gone, leaving disappointed customers in their wake. The main problem with most of this equipment is durability in the marine environment. But just because it doesn’t have the marine label on it, doesn’t mean it wont last. PS contributor, and longtime cruiser Joe Minick had good luck setting up an onboard network using equipment rated for outdoor use, though not specifically the marine environment (see Building an Inexpensive Wireless Network, PS January 2011 online).

The two-in-one WiriePro device allows users to connect using either a shore-based Wi-Fi network or cellular service (2G/3G/4G/LTE). And like most Wi-Fi boosters weve reviewed-including the Coastal Marine, Rogue Wave, and Bitstorm-the WiriePro relies on a long-range Wi-Fi adapter from Ubiquiti. The WiriePro uses Ubiquitis Bullet M2HP Titanium, which is housed in an aluminum weatherproof casing.

The WiriePro mounts the Bullet and a 2-dBi wide-band antenna for cellular service (xG/LTE) onto a hard-shell, waterproof (IP67) box. Inside the box is a commercial-grade 2G/3G/4G/LTE router, with access to the slot for installing a cellular service providers SIM card. The integrated form factor minimizes wire runs and simplifies installation, but it also locates the router abovedecks (albeit in a watertight box). Other systems place the router below decks.

When using cellular systems, The WiriePro will work with Global System for Mobiles (GSM) carriers worldwide using 3G/4G networks with speeds up to 21 Mbps. In areas with LTE support, speeds of up to 100 Mbps are possible. (Not all carriers use GSM; Verizon and Sprint do not.) Keep in mind that the router and 2-dBi antenna are not cell-phone boosters, they are a means of extending coverage by placing the antenna outside the boat (the higher, the better). For $100 more, you can upgrade to a compact 6-dBi, xG antenna for extended range-as far as 20 miles, according to Wirie.

There are also some upgrades specifically geared toward sailors, like an optional, integral GPS ($25) that-so long as you are in internet range-lets friends follow you online using the Spotwalla app. (The Spotwalla tracking widget works with smart phones alone, as well). For $79, you can also get The Wirie Ex, which serves as a wireless bridge and repeater to extend coverage on larger yachts, to friends (or clients) in your vicinity, or to connect hard-wired Ethernet devices to your local network. The Wirie firmware has settings that allow you to control who uses your network-and you can even advertise your services to people who log in, something that might appeal to the mobile jewelry-maker, sailmaker, book editor, etc.

It took testers about a half-hour to install The WiriePro using the hardware provided. It comes with 25 feet of cable, enough for mounting on rails or davits. You don’t want to mount it too far out of reach, because you’ll need access to your SIM card slot. Setup was quick and simple using the quick start guide. Once we were up and running, our spotty marina connection was seamless, and we were able to connect with Wi-Fi stations more than two miles away. Logging onto the network at Marina Hemingway required that you buy a scratch-off card with a code that gives you one hour online, and we quickly learned that multiple users should share just one card on The WiriePro network, as multiple cards can be exhausted simultaneously unnecessarily.

If a solid Wi-Fi link is the only thing you want, the less expensive WirieAP ($400) is a better fit. Bitstorms more streamlined antenna, the Bitstorm XTreme MJ ($390) with and three-year extended warranty ($30) would also be an excellent choice. Rogue Wave, another longtime player in this field, has also upgraded its line. And most techies recognize that they can-as we have-set up a Wi-Fi adapter using Ubiquitis Bullet for less money.

Finally, since most mobile phones already have a mobile hotspot Mi-Fi function, the ability to switch to cellular may be overkill for the casual user, but it certainly simplifies life for the sailor who needs a solid connection with the fewest hassles -although automatic switching when Wi-Fi drops out would be nice.

Bottom line: Were still testing the WiriePros cellular capabilities, and we worry some about having the router abovedecks (even in a box), but the box setup is not new, so any durability issues should have been brought to our attention by now. Based on feedback weve received from readers on this topic, having solid tech support from people who have been out there is golden. Stay tuned for an update. If you have another solution to staying connected, wed like to hear it at practicalsailor@belvoir.com.