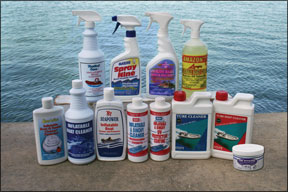 It often seems that this whole boat-cleaner craze is getting out of hand. These days, the shelves of marine chandleries are crowded with black-streak cleaners, canvas cleaners, vinyl cleaners, and so on. Practical Sailor has tested many of these products and come to the conclusion that a mild solution of biodegradable boat soap and some elbow grease is often all that is needed.

However, when it comes to deep cleaning, or attacking stubborn stains, a specialty cleaner is sometimes worth the modest expense and can save a great deal of time. The good thing about using a specialty cleaner is that it is designed to clean but not harm the surface it is cleaning. (How many nylon spinnakers have been weakened or ruined when a mild solution of bleach and water was used to remove mildew?)

Inflatable boat cleaners are one case in point. For ordinary cleaning, regular boat soap and water will work just fine, but for more serious jobs, an inflatable boat cleaner is recommended. Although PVC and Hypalon fabrics are fairly resistant to the chemicals commonly found in cleaners, all of the makers of inflatable boats that we spoke with advised using a dedicated inflatable cleaner rather than high-strength cleaners designed for other purposes.

For this test, Practical Sailor rounded up 11 inflatable boat cleaners, including products from long-time manufacturers of marine maintenance products. We bought cleaners from such household names as Star brite, MaryKate, Nautical Ease, Marine Development and Research Corp. (MDR), and Seapower. Testers also picked up a couple of cleaners targeted at the whitewater raft market. Many of these products are meant to be followed by a UV protectant, which we will be reviewing in a future article. Several dealers of inflatable boats recommended 303 Protectant (www.303products.com) for use on their Hypalon and PVC boats.

The French company Pennel & Flipo sent some of its cleaner, which is made specifically for Hypalon. This company manufactures Orca Hypalon fabric, the material used by many dinghy manufacturers. The Pennel & Flipo cleaner comes in two ways: a detergent-like liquid and something similar to a liquid wax or rubbing compound. Zodiac also manufactures a cleaner for its inflatables, which include Avon, Bombard, and the Zodiac brands. The product, called Revival, was the only paste in our test group. For comparisons sake, we included one of our favorite all-purpose marine cleaners, Spray Nine.

The test products ranged in price from $7.60 for Nautical Ease to $38 for Revival. Most of the products must be poured on to a cloth or sponge for application, while four of them came in spray bottles.

Nearly all of the products say they contain ingredients that can harm the eyes and skin. And of course, they should not be ingested. But only four of the 11 cleaners recommend the use of gloves, and none the use of eye protection. However, its always a good idea to wear proper protection when using any chemical.

Our test platform was a neglected, white Avon Rover R250 that had gathered an extensive coating of mold, mildew, and dirt after several months of being stored outside at our local sailing club, the Sarasota Sailing Squadron in Sarasota, Fla. This nasty film was pretty consistent on both the port and starboard tubes, which are Hypalon.

Testers sectioned off 11 areas of the tube, using blue masking tape. Each area was about 10 inches high by 12 inches wide. We followed the directions on the label of each product, using sponges, brushes, rags, or whatever was stipulated. And then we went to work.

The testers gave each cleaner two ratings-ease of application and cleaning effectiveness. All the cleaners worked, but some noticeably better than others. To garner an Excellent rating, the cleaned surface had to be completely free of dirt, mold, and mildew. A Good rating was given if the area had a small amount of grime remaining. And a Fair was given when a cleaner removed the surface grime but failed to dig out the ground-in dirt. No cleaner received a Poor cleaning rating. (See the Value Guide above).

Five of these products-Revival, Star brite, Seapower, MDR, and Nautical Ease-claim to clean and protect the surface. Well monitor these areas to see how well the products are protecting them down the road, and we plan to include these in our future test of protectants.

The Star Brite Inflatable Boat & Fender Cleaner calls for four steps. Directions say to wash the area to be cleaned first, but it does not say with what or how. (We used a wet rag with some Palmolive on it to get off the loose dirt.) Then you rub briskly with a cloth, allow it to dry, and wipe away the haze with another cloth. This 16-ounce bottle is $13 at West Marine, which ties it for the second-most-expensive spot.

It did a good job of cleaning its section of the Avon. A polymer is used to protect the surface.

Bottom Line: A good cleaner, but its not as easy to use as some of the others because of its multiple steps.

The MDR Amazons Inflatable Boat Cleaner comes in a 32-ounce spray bottle. There were no detailed directions on the bottle. In fact, the bottle simple says “cleans fast-spray on and wash away the dirt.” Theres nothing about whether to use a cloth, sponge, or brush.

The Amazons was easy to use, but it didnt do as well as many of the other cleaners, garnering only a Fair. No gloves recommended. It is one of the least expensive products in the group-only 68 cents per ounce.

Bottom Line: Incomplete directions and a Fair cleaning rating hold this product back.

Its easy to use. Just spray it on, wait a minute, scrub, and rinse. If using for prolonged periods, gloves are recommended.

Bottom Line: An effective cleaner at a great price. It gets the Budget Buy rating.

Even after repeated head-to-head testing, testers concluded that the NRS worked slightly better than the Nautical Ease. Its section of Hypalon was bright white after we finished with it. Gloves are recommended.

Bottom Line: Its very effective and easy to use. Its in the middle of the pack, pricewise.

The 32-ounce MaryKate Cleaner for Inflatable Boats, Tubes & Towables is among the least expensive in our group. Like the NRS cleaner, the MaryKate is supposed to sit for a couple of minutes before being wiped off.

The MaryKate worked well, but not as well as the NRS and some other cleaners.

Bottom Line: A good cleaner at an attractive price.

The MDR Inflatable & Dinghy Cleaner/Inflatable & Dinghy UV Protective Coating come in separate 16-ounce bottles. The products are sold as a package and cannot be purchased separately. Years ago, the two products were sold separately and as a kit, but the company decided to only sell them packaged together. Although Amazon is an MDR product line, the MDR and the Amazon cleaners are not the same and have different formulas, according to Bill OBrien, MDR vice president of sales and marketing.

The MDR produced a foam when it was applied. The directions say to let it sit one minute and then rinse/wipe off. The very effective cleaner earned an Excellent rating. The protector went on easily; you wipe on and wipe off.

Bottom Line: Expensive but recommended due to the super job it did on its section of boat. Well see how the protector works.

The Seapower Inflatable Boat Cleaner and Preserver is one of the more viscous liquids we tested-almost like a liquid wax. As with the Star brite product, the user rubs the liquid on the surface briskly and then allows it to dry. The dried product is removed with a clean rag. Clearly, it is more time-consuming to use this type of cleaner, but the Seapower is also a preserver, and if it protects well, then it might be worth the trouble.

The Seapower did not fare as well as the others cleaners, scoring a Fair for a cleaning. At 81 cents per ounce, its not cheap, either.

Bottom Line: This cleaner did not work well for our testers.

The Pennel & Flipo Orca Tube Cleaner is a two-step cleaner. The Step 1 cleaner, which is a detergent-like liquid, can be used alone. For boats with heavily soiled Hypalon, both products are recommended. The Step 1 product did a commendable job of cleaning its section of material. It foams up quickly as you scrub with a sponge. PS also tried out the Step 2, which is a much more involved affair. The gel-like substance is applied with a sponge and must be allowed to sit for one hour. Then, you rinse with water. Testers thought that the Step 2 did nothing to improve the cleanliness of the area already washed with Step 1. Maybe our test boat was not dirty enough.

The U.S. distributor, Louis Courcoux, mainly sells to boat companies but said in early 2008 he will be starting to sell to the public. By that time, Courcoux anticipates pricing to be more competitive.

Bottom Line: The Step 1 product did a great job, but it and the Step 2 cleaner are very expensive compared to the other products that also tested well.

The Revival Ecological Paste for Boats was the only paste cleaner in the field. Its made for inflatable boats under the Zodiac umbrella, which includes Zodiac, Avon, Zoom, Jumbo, and Bombard. The directions say to use a sponge to remove some of the product from the container, then squeeze the sponge until the cleaner lathers up. Rub in and rinse off. Our testers thought the paste, which was harder than your typical car wax paste, was hard to work with. On the positive side, the Revival is not harmful to the skin or eyes, is 90-percent biodegradable, and it works well. Testers gave it a Good rating.

The Revival is by far the most expensive product that we tested-a whopping $38 for a 16-ounce container. The label does say the product has an unlimited shelf life.

Bottom Line: Revival is more expensive and more difficult to work with than other cleaners.

As we mentioned, we threw in Spray Nine, a proven general-purpose cleaner, to see how it would fare against these specialty inflatable boat cleaners.

Spray Nine did OK-testers gave it a Fair cleaning rating-but it failed to remove the ground-in dirt from its test area.

Bottom Line: Not as effective on Hypalon as most of the other inflatable boat cleaners.

In the end, the NRS cleaner was rated as the Best Choice, and its sibling Nautical Ease was named the Budget Buy. The MDR cleaner is also recommended. The Orca is very effective, and we look forward to seeing more of it on the U.S. retail market. 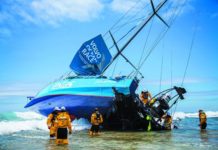 NOAA Charts Coming to an End 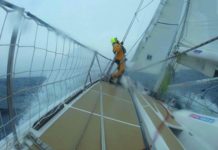 Lessons from a Death at Sea