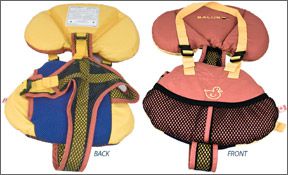 In October 2006, Practical Sailor tested infants life jackets and our top pick was MTI Adventurewears Bay Bee 201-I, one of the few jackets we looked at that met our chief criteria for an infant life vest: flotation that turned the infant face up and kept his head well above water, comfortable snug fit, easy donning, and a wide grab strap near the top that allowed someone to easily lift the child from the water or dinghy.

None of the jackets that we tested was suitable for very small infants weighing less than about 20 pounds. One reason for this is that the U.S. Coast Guards minimum buoyancy standards apply to children up to 30 pounds, resulting in a vest that is extremely bulky for infants less than 6 months old.

Despite the lack of any certifying standards, the Canadian company Salus Marine has been selling a vest for infants between 9 and 25 pounds since 2006. It still has no official certification in the U.S. or Canada, but several PS readers have praised the PFD, saying its the only one their baby will wear.

With well-distributed flotation, four adjustment buckles, a broad tri-segment head support, lifting strap, and a mesh back, it meets our criteria for a well-designed infant jacket. In field tests, it turned the infant face up, but one PS reader reported that the shoulder straps were too far apart for his small child. It costs $70, twice that of the MTI Bay Bee (www.mtiadventurewear.com), but it is hard to put a price on items such as this.

This product should be regarded as an extra layer of protection, not a license to leave a child unmonitored near the water. Since every child floats differently, it should be tested in a pool or calm water for proper fit and flotation.