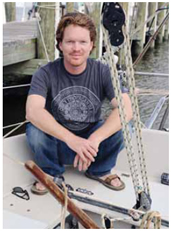 In 2003, Matt Rutherford made a sight unseen commitment to cruising from his home in Ohio. Over the phone, he bought a Coronado 25 located in Trappe, Md. The boat needed a lot of TLC. He fixed what he could and learned to do without what he couldn’t afford.

In 2004, Rutherford and his girlfriend who had never sailed before set off down the Intracoastal Waterway (ICW), headed for adventure. She left after the shakedown cruise, but Rutherford carried on, working his way up a series of older boats.

Three years and three boats into his cruising life, Rutherford moved up from the Coronado to an old Pearson 26. When an old Pearson 323 came into his sights, so did a plan for extended bluewater voyaging.

The 323, a Bill Shaw designed racer/cruiser, saw its heyday in the late 1970s as a part-time racer and summer cruiser. But for Rutherford, this was a big boat, and he soon set out on a high-latitude passage to Europe. A string of gales and a tropical storm quashed plans to visit Greenland and Iceland, and after 34 days at sea, he made landfall in Falmouth, England. He sailed on to France and the Netherlands where he stored the boat while he returned to the U.S. to build up the cruising kitty. The following season, 2006, it was on to Portugal, Spain, and as fall turned to winter, he headed on to the Canaries.

After a detour to Gambia, he headed back across the Atlantic in warm tradewind easterlies, making landfall on Antigua. He arrived in the Caribbean with $20 left in the kitty and headed to the U.S. Virgin Islands to find work. Between voyages, he worked on Alfa Romeos, stitched sails, and did what it took to prepare for his next voyage. Always looking for the next boat and the next adventure, he eventually founded a relationship with the Chesapeake Region Accessible Boating (CRAB) nonprofit.

Run by Don Backe, CRAB has been promoting and developing programs for handicapped sailors for decades. Backe and Rutherford devised a fundraising plan to support CRAB’s mission to increase access to sailing for handicapped sailors. At the time, Rutherford was planning an Arctic voyage in an International Folkboat, but when CRAB offered him its Albin Vega 27, the plans became reality. Rutherford’s voyage raised significant funding for CRAB’s cause via www.crabsailing.org. (Visit the website to learn more.)

As for Rutherford’s next passage, he’s planning an Arctic trip to raise awareness of the region’s fragile habitat.