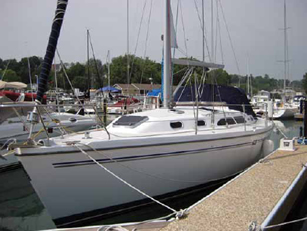 Practical Sailor has done a service to sailors by bringing the US Sailing reports to its readers’ attention and providing further analysis (PS, March 2012, April 2012, and May 2012 issues). While US Sailing’s investigation was certainly called for, it should come as no surprise to anyone that WingNuts was not fit for the Chicago-Mac race. Shortly after the tragedy last summer, I Googled “Kiwi 35” and learned then that these boats are as stable upside down as upright, that they displace all of 2,850 pounds, of which 1,100 is ballast, that these boats have been known to flip over at moorings, and that most of the righting moment for this boat comes from crew, which cannot be counted on to stay in place exactly when needed most. None of this information was unavailable to the people that raced WingNuts.

The factor not considered by US Sailing or Practical Sailor is the testosterone poisoning that infects some racing sailors, sufficient to blind them to the life-threatening nature of their boats and the conditions they race in. I have sailed Lake Michigan for 25 years in a wide, heavy cruising boat, and I pick the weather I leave port in very conservatively, yet, the lake has tried to kill me just the same.

My wife tells the story of visiting a new colleague in his office; upon seeing several boat pictures on the wall and a winch on his desk, she thought she would have a great bonding opportunity. “I see you sail,” she said, to which he replied, “I don’t sail, I race.”

Of the many unfortunate outcomes of the WingNuts accident, one is that, due to the extreme characteristics of the Kiwi 35, many other racers in boats of aggressive design and construction, and those who go out on the race course regardless of conditions, will believe there are no lessons for them.

After reading PS’s WingNuts Safety at Sea report (PS, April 2012), I would like to offer a comment that quick-release snap shackles should be hooked into a metal ring on the harness. After 40 years in the commercial diving business, I know that a snap shackle needs the smooth surface of a metal ring to open quickly.

Photo number 5 on page 24 of the April issue shows a cloth or canvas hooking point on the harness. This will not allow the quick release to open while under strain.

I have been following the safety tether discussion for quite some time. I am familiar with a type of quick-release buckle that might be applicable to harness-tether systems. I am a whitewater kayaking instructor on the South Fork American River. There is a category of whitewater PFDs known as a “Rescue” PFD that has a belt with a quick-release buckle rated for load. It is intended to allow swiftwater rescuers to be lowered into a turbulent river and release the buckle under tension, if needed, in an emergency to release from the lowering/rescue line. When the buckle is released, the belt slips free (bitter end). Normally, there is a stainless O-ring threaded through the belt/PFD that is the anchor point for the rescue line or locking carabiner; the O-ring usually is at the center of the rescuers back in this application. When the belt slips free, it releases the O-ring, which remains securely fastened to the rescue line but no longer to the person.

You can see an example of this at www.coloradokayak.com/Astral-QR-Rescue-Belt.html. The belt will hold a very high load and is designed not to release accidentally. It has a red ball that is easy to locate blindly. Some technical info is available at www.whitewater-rescue.com.

I think this could be integrated into an offshore PFD design.

I can’t tell you my surprise when I received my copy of Practical Sailor’s April issue and there was an Ericson Independence 31 on the cover. I did a double take thinking she looked nice and was a dead ringer for mine, and then I realized it was me and my boat! I wish someone had been standing there to film my face as I went through the recognition process, starting with the thought of how cool to have an Independence 31 on the cover, and then as I start checking out this boat, I realize it’s mine! I’m still chuckling over it.

She is an Independence 31 built in 1979 by Ericson and is a Bruce King design. The Cruising 31 had a different layout below and non-opening cat-eye style ports. I believe the first 25 hulls were Cruising 31s, and then the layout was changed with a few other details, and the Independence 31 was born. There were a total of 69 built by Ericson. I am the second owner of the boat, and she currently is berthed on the Severn River outside of Annapolis, Md.

As a committed DIY person, I am rather interested in your homemade holding tank vent filter (PS, March 2012) and know it would be easy to construct. What did you use for the carbon filter? Where might I get it?

Although there are specialty carbon products optimized for sulfide treatment, they are not available in less than 50-pound bags, so we chose something more practical: pelletized carbon (like Marinelands Black Diamond premium activated carbon) from a pet store (www.petco.com) or aquarium supply store. Pelletized carbon is preferred for gas treatment, is widely available, and is relatively inexpensive at about $10 per 10 ounces (a single fill requires about 8 ounces). The internal carbon supports we used were cut from open-cell foam used for aquarium filtration ($2 for 30-gallon size), which you also can find at Petco and other pet stores.

In regards to “Cockpits Take Center Stage” (PS, April 2012): From a purely cruiser perspective, can I suggest that your article left out several very important aspects of cockpit use?

1. Center cockpits deal with fish blood and guts much better than do stern cockpits. Fishing and boat management should be two separate and distinct tasks, each with its own space.

2. When at anchor in an idyllic tropical anchorage, the biting bugs come out just when you are sitting in the cockpit enjoying the sunset and an adult beverage. We solved that problem by having a mosquito net cover, weighted all around the bottom, that I throw over the dodger. It completely encloses us in bug-proof, cooling-breeze accessible comfort.

3. We have one wheel, and it is less than two feet in diameter. Why have a bigger wheel when it is used only for entering and leaving port? Autopilots rule. That allows so much more of the cockpit to be used for living and entertaining, the reasons we cruise.

4. The ability to comfortably sleep in the cockpit when in port or during a passage cannot be over-rated.

5. Because our cockpit can be fully enclosed, we took our foul-weather gear out of the locker for the first time when we completed our six-year circumnavigation. Weather and sun protection, while in port or at sea, add considerably to the enjoyment of all.

6. The cockpit has to allow space for radar, VHF, wind, depth and other instruments, autopilot controls, engine instrumentation, compass, etc., to be seen and accessed from a position behind the wheel. There are times when immediate access to all of these, by one person, is a serious necessity.

During a flare-firing demonstration at the recent Safety at Sea seminar in Newport, R.I., we discovered that the new Orion red plastic 12-gauge flares (PS, January 2012) will not chamber properly in an older Olin metal 25-millimeter flare gun with the Olin metal 12-gauge adapter. They will fit the new plastic Orion gun (www.orionsignals.com), with which they are sold.

There is a neck down in the 12-gauge adapter that occurs too close to the breach for the plastic flare to fit into the gun. There is no clear indication that this would occur, and it might well be that a boat owner with an old Olin metal gun and converter would buy these new flares to make sure he is up to date and legal. As the flares come sealed in waterproof plastic, it is not likely that an owner would try to chamber one until he was in distress.

A second, and likely newer, 25-millimeter flare gun with a blue anodized 12-gauge adapter will properly chamber the new flares. This gun appears identical to the 25-millimeter flare gun above, except for having the plastic parts made of blue plastic and carrying the “Orion, Peru, IN USA” logo on the handle versus the “Olin E. Alton IL USA” on the Orange gun. The Coast Guard approval number is the same for both guns. The blue 12-gauge adapter from the Orion gun will fit into the Olin gun, and visa versa.

The discovery left us curious about other possible problems with our old flare guns, so we tried to see if the new flares would chamber in the older plastic Olin and Orion guns that we had on hand. The flare will chamber in the older plastic Orion 12-gauge gun. When we tried what is probably an older plastic Olin 12-gauge gun with the same approval number (stamped “Olin and E. Alton IL”), we could not break the barrel far enough to be able to load the 12-gauge flare. I believe this may have been previously reported.

We do not recall reading a warning of the first incompatibility, and we believe it could be a life-safety level issue. I have four flare guns that one would think would be all set to fire the new flares, but half of them cannot be made to function.

We appreciate your alerting us about the issue. We reported in the February 2012 issue that the barrel of some 12-gauge plastic flare launchers made by Olin and Orion Safety Products before the year 2000 may not open sufficiently to load the new cartridges. Anyone with such a launcher should contact Orion at 800/851-5260 or mcustomerservice@orionsignals.com for instructions on how to get a replacement, or visit the company website. Your experience is a good reminder that boaters should always check safety equipment before setting sail; this includes checking to be sure your flares are compatible with the launcher on board. According to Orion, the Schneider’s report was the first complaint of this type that it had received. The company said it could be that the incompatible (older) 25-millimeter-to-12-gauge converter was one made by SkyBlazer Inc., not one made by Orion or Olin. At presstime, Orion was planning to inspect the Schneider’s older launchers and converters and was investigating the issue. “Every Orion 12-gauge red aerial shell includes the words “For use in Orion launchers only,’ ” Orion’s Rod Utter explained. “If boaters have 12-gauge converters for their 25-mm launchers and they are not the blue anodized aluminum converters currently sold by Orion Safety products, they need to carefully check to see if their equipment will allow an Orion signal to properly chamber in the launcher.” We’ll keep readers posted as the probe moves forward.

The table on pages 22 and 23 of the April 2012 issue included information that calls for clarification. The entries for both Mark Morley and Suzanne Bickel, under the “PFD Inflated at Time of Tether Release?” column should have read “Not released; PFD inflated when body was recovered.”

The AyeTides XL iPad app, designed by Hahn Software, that we reviewed in the April 2012 issue does not need an Internet connection to access tide and current predictions. Other information was given in the print article.

Product Updates
Reader's Workbench
Where Credit is Due