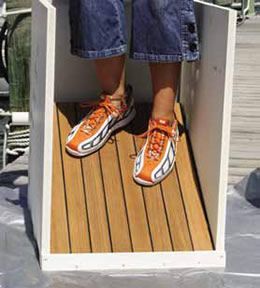 I had a bit of a problem last month when we scheduled our latest shoe test. PS Managing Editor Ann Key, our premier shoe tester who has become something of a sailing-shoe expert over the last eight years, was expecting her first child. Anyone who is familiar with our medieval shoe-testing device would understand why I had to find a substitute-and why no one else in our office immediately volunteered.

In the end, I was the substitute.

Basically, the shoe test goes like this (note to our companys risk-management officers: now is the time to go check that pot of boiling water someone left on the galley stove): The tester puts on the test shoes, stands on an angled jig (usually 20 degrees to start), and prays that he doesn’t break his neck. The shoes are tested on two surfaces, teak and nonskid, with each starting out dry, and then shoes are re-tested with the surface wetted down. If the tester doesn’t slip after the first round, the angle of incline is incrementally increased. The highest angle achieved before the tester slips is recorded. The series of tests are repeated with each shoe model, or until someone is bleeding-in which case, testing is suspended until the tester has recovered well enough to try again.

It would be funny, if it wasnt true.

Slip and fall accidents are the number two cause of occupational injury in the U.S., and in few places are the consequences of a slip and fall more serious than aboard a boat. Our previous tests in this area have focused on nonskid deck surfaces and shoes, and Ive never been fully satisfied with how we were able to evaluate either, so I decided to do some more research, hoping to improve our tests.

With more than $7 billion in annual costs associated with slip-and-fall injuries in the United States, there is no shortage of shoe studies focusing on slip prevention. A recent report noted that since the 1930s, researchers have used more than 90 different methods and 62 different devices to measure slip resistance. All of these methods attempt to calculate the coefficient of friction by measuring the vertical and/or horizontal force required to induce a slip. However, there has been a long-running dispute among scientists over whether any of these fairly replicate the real-world scenarios workers encounter on the job.

The more I researched the topic, the more I realized that our rudimentary shoe-test protocol is not much different from the type of testing going on in labs around the world. In fact, as Sperry Top-sider product specialist Lee Baxter described to me, one of the latest tests being carried out in Europe sounds almost exactly like what weve been doing . . . except for one thing.

They wear a harness, Baxter said, so if the tester slips, he doesn’t fall and get hurt.

Now they tell me.

In the end, I found the report I was looking for. It was an extensive ergonomic study. Its finding? Stay low, take small, deliberate steps, and youll rarely slip or stumble. Simple as that. Shoes help, but theyre no substitute for this hard-won wisdom: Keep one hand for yourself, one for the ship.