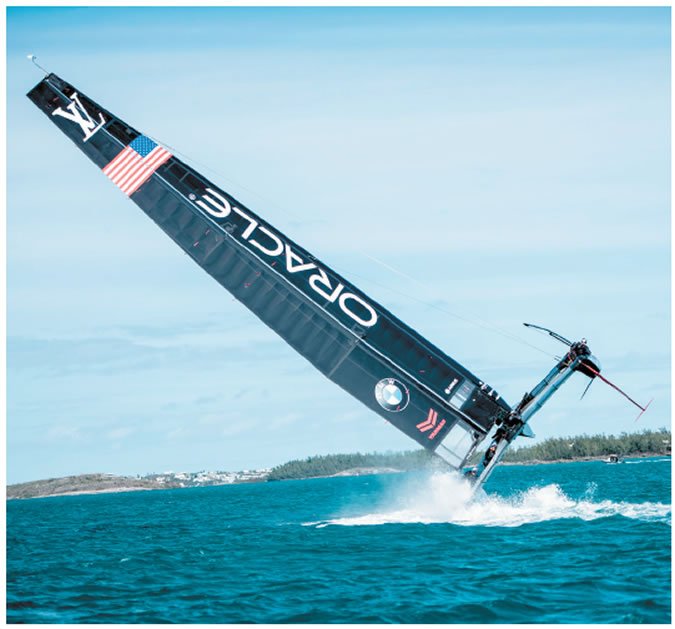 When the heeling moment of a multihull overwhelms the righting moment, the boats going to turn upside down. The optimist points out that youll still be afloat, albeit inverted. The bottom line is the cruise or race is definitely over and the trick is not getting trapped under in the cockpit, side deck netting or tangle of a crumpled spar and rigging.

Wave face geometry is another key variable. Designers and naval architects speak of the water plane as the perimeter outline at water level of a vessel at rest or under way. In a wave-less water column the water plane is perpendicular to the force of gravity. However, when a vessel sails up, down or across the face of a wave, it ends up with a waterplane no longer perpendicular to the force of gravity. Take for example a beam reaching multihull with a dominant swell also on the beam. As a larger wave face approaches the boat there is an uphill and downhill relationship between amas that changes the vessels water plane and also significantly affects vessel stability. Being caught by a big gust when the leeward ama is in a down slope position on a wave face negatively impacts vessel stability.

Another big challenge lies in balancing fine forward sections with the need for velocity induces lift. Its a hydrodynamic puzzle with many nuances. Cruising multihulls with more volume and freeboard in the bows go slower and have less proclivity to root an ama and test their tendency to pitch pole. The designers skill plays out in how volume is proportioned in the hulls, where the weight is distributed, whats the right amount of beam and how much payload carrying capacity and sail area fit into the equation. If the boat is too wide, heavy, overly fine forward or the longitudinal center of gravity (LCG) is slightly off, such shortfalls will show up in a seaway. But even good boats can get into trouble.

Last fall, a three-person crew sailing a 57-foot the Chris White designed catamaran named Leopard ran into trouble during a passage to the Caribbean. All of the crew was belowdecks engaged in vessel operations when the capsize occurred. They were about 400 miles north of the Dominican Republic and reaching under a partially furled jib and double reefed mainsail when a powerful wind gust abruptly flipped the boat. One of the crew in the galley was hit by the stove, which had apparently not been mounted securely. Fortunately, the crew member was not seriously injured (being in the cabin probably helped). The boats EPIRB (emergency position indicating radio beacon) was activated, enabling a hasty rescue.

The wind velocity preceding the incident, was in the 22 to 28 knot range-a midway point in whats termed small craft warnings. The Ocean Prediction Centers weather forecasts and analysis for this time and location indicated a deteriorating mid-level trough and an approaching weak cold front. The gradient was relatively slack, and there were no gale or storm warnings in the area. A close look at their mid-level 500 mb weather map revealed that the trough mentioned earlier would likely influence the surface low and cold front, and the resulting vertical instability in the atmosphere might give rise to sever thunderstorms. Some have suggested that a tornadic waterspout may have been the causal factor. Such weather phenomena do infrequently occur in the tropical Atlantics western basin and Gulf Stream waters.

With abundant heat and vertical instability in the local atmosphere, very intense single cell thunderstorms regularly develop. But with two reefs in the main and a reefed down headsail, it took quite a gust to overcome Leopards impressive righting moment. In open ocean areas, even well-trained meteorologist are unable to pinpoint when and where waterspouts and sever single cell thunderstorms will erupt. The only way to combat such an abrupt rise in wind velocity is to always be ready to instantaneously ease the sheets and traveler and depower the sail plan. Unfortunately for the sailor attracted to high performance multihulls, this is a task that has yet to be automated.