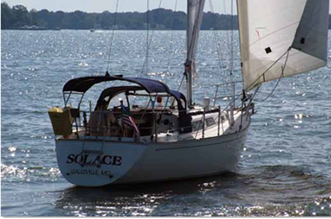 In your test of chafing gear, you omitted Boatleather’s chafing sleeves (www.boatleather.com). As with all of the Boatleather products I’ve added, the chafing sleeves are both elegant and practical. They fall somewhere between store-bought and DIY. You’ll have to learn the baseball stitch and spend a little time and effort, but the results are worth it. Besides, it’s good practice for making that wheel cover you’ve always wanted!

In the October 2011 article on washdown pumps, it looks like the Groco (www.groco.net) and Shurflo (www.shurflo.com) pumps have threaded fittings made of plastic. I offer a heads up to users that when threading metal hose female ends on to plastic male ends, care must be taken to avoid cross threading the plastic, thereby creating an almost permanent leak. Get a metal fitting with a hose sized male on one end and a female on the other (or put on a custom-sized piece of hose) and carefully screw it on, leaving it permanently in place. This way, you will always have a metal end on which to screw your washdown hose.

You are correct about the risk of cross threading metal to plastic. While the Shurflo’s threads are indeed plastic, the Groco’s are not.

I had to laugh when I read your piece about sodablasting boat bottoms (PS, October 2011)! It’s the same technology that my dentist uses to clean my teeth! Works great!

I recently read your article on sodablasting bottom paint off a boat (PS, October 2011) and started researching the possibility of doing it in my neck of the woods. I came across several references to companies that will not guarantee paint adhesion to sodablasted surfaces, and I became a little concerned. Is there any additional information you could include about this? I am considering this process on a 1977 Kelly Peterson 44.

Sodium bicarbonate is the media used in sodablasting. It is softer and less abrasive than sandblasting or sandpaper, so the process does not open up the gelcoat during paint removal, according to Chesapeake Soda Clean owner Stacey Stone (www.chesapeakesodaclean.com). With fewer open surface voids—which can trap dust—there are fewer places for paint/soda contaminants to hide and interfere with paint adhesion. Once the paint has been removed from the bottom, the applicator air blasts the surface to remove most of the sodium bicarbonate and paint residue. And before painting, a thorough hull brushing and washing is carried out. Many pros also do a solvent wipe just prior to painting, regardless of whether the hull has been sanded or sodablasted. No matter the stripping method, there’s residue left behind that must be removed.

Another tip to avoid surface contamination (and potential paint adhesion issues): Always take a close look at the equipment used by a sodablaster before signing up for the service. A new or well-maintained compressor is less likely to have worn rings that allow oil to escape with compressed air. These also usually have better water separation capability, which allows for a clean stream of compressed air and sodium bicarbonate to be output, decreasing the likelihood of surface contamination.

Editor’s Note: Since our report, the Bad Dust company has re-organized; Positive Containment Systems is the new name for the company manufacturing Bad Dust boat bottom tenting (860/267-1733 or www.baddust.com).

Thanks for your dinghy launching wheels report in the October 2011 issue. Davis Instruments appreciates PS finding our product’s weaknesses, and we gladly own up to them.

You uncovered a problem with the pin-hole diameter in the Davis wheel strut being too large. The spec needs to be tightened up a bit, and we’ll get there, hopefully, on the next production run. In the meantime, Davis Instruments will distribute free pins to any consumer who has lost the pins to their Davis Wheel a Weigh launching wheels. For more info, call 800/678-3669.

We’ve been long-time users of Minwax’s Spar Urethane, which gets decent, but not great reviews in your varnish reports. We use the Minwax at four to five coats, touch it up with a new coat regularly, and get great results.

In reading the articles’ “How We Tested,” one would gather that when you “applied per manufacturer’s instruction,” you applied three coats of the Minwax. What might the test report show if you applied seven or eight coats, like the Epifanes calls for? Applying three coats is way easier than applying seven-plus coats; how is that not reflected in the “Ease of Application” rating?

Three coats of Minwax compares fairly well in cost-per-use with the Ace (requiring four coats), and it’s one-fifth the cost of the Epifanes per use.

You surely would get longer-lasting results applying seven-plus coats with many of the exterior wood finishes we tested, but most do not call for that. Our previous long-term wood finish test (2001-2002) included 20 varnishes, each applied with two, three, five, and seven coats. The final results appear in the Oct. 15, 2002 issue, and found that after two years, and with all coatings applied with the same number of coats, Epifanes, Pettit Hi-Build, and West Marine Skipper were the top varnishes. Minwax was not included in that test.

For our current round of testing, we opted to follow maker instructions for each product as that’s what most users do, and we sought to rate the application in terms of real-world usage. The ratings of products with more application steps—additional coats, sanding between coats, etc.—reflected the added effort. Epifanes (www.epifanes.com) was among those products: It was rated Good for ease of application while MinWax (www.minwax.com) was rated Excellent.

Our tests do not include regular maintenance coats, so the coatings won’t last as long on our panels as your boat.

I was disappointed in your October 2011 editorial on No Discharge Zones (NDZs). You seem to be defending the Raritan LectraSan. The idea that the No Discharge Law will stymie development of effective onboard treatment systems is naive. To remove solids and nutrients from wastewater for a yacht would be outrageously expensive.

You seem to have forgotten your six-month test and recommendation (PS, Nov. 15, 2002) of the Air Head composting toilet (www.Air Headtoilet.com). On your recommendation, we installed an Air Head years ago, and having lived aboard for over a year, I can tell you it is a wonderful alternative to holding tanks.

Just a note about the “No Discharge Zone Illusion” editorial in the October 2011 issue. I have been a tree-hugging environmentalist and avid cruiser all of my adult life, and I agree with the piece 100 percent! NDZs do not discourage the dumping of untreated waste. These prohibitions have been in place for decades. NDZs only discourage the installation of devices like the Raritan LectraSan (www.raritaneng.com) by those who are willing to endure the complexity and expense.

Certainly in some circumstances, like marina basins, and regarding large volumes of waste from shipping or other large commercial vessels, “holding and pumping” are the only reasonable option. For the owners of small cruising boats, however, the discharge of LectraSan-treated waste is a very minor issue.

To discourage their use is to increase illegal dumping of untreated waste, because there is no other option for many transient cruisers, who could otherwise spend huge amounts of time, like an entire day at least once a week, in search of a convenient pumpout station.

Around here, 99 percent of the pollution that leads to low dissolved oxygen in the water and fish kills is from hog farm runoff, fertilized agriculture, golf course, and lawn runoff, as well as the occasional half-million gallon waste treatment “spill” from local municipalities, when their systems become overwhelmed in floods. It is easier to point at boaters.

Regarding your PS Advisor (August 2011) on compressed natural gas (CNG) refills. While Corp. Bros are happy to refill and exchange, the $75 cost of hazardous freight shipping gets the “per bottle” price near $150. If you can drive to a Corp Bros. location, however, it IS the way to go.

Many of the CNG refilling stations in the published map refill the truck and auto CNG fleets. While the low cost of “gas” at these stations is appealing, there is a real danger. Marine CNG tanks need to be inspected every five years to insure they are safe (about $20 at an industrial tank inspection facility). And, the motor vehicle fill stations pressurize tanks to 3,000 to 4,000 psi. Boat tanks have a max pressure of 2,200 psi and have a pressure relief valve set at approximately 2,200 psi. Adaptor fittings from the pump nozzle to the CNG tank would have to be jury rigged, along perhaps with a regulator (about $150). Also fill station managers don’t want the liability of this DIY refill. A proper CNG vehicle is one thing; local yokels with a deathwish is another. The takeaway here is that readers should contact local gas companies. CNG is everywhere, so perhaps there is a re-seller nearby. Don’t refill without a professional’s help.

Thanks, Duane. The online version of the article now lists the correct price.

Product Update
Readers’ Workbench
Where Credit is Due