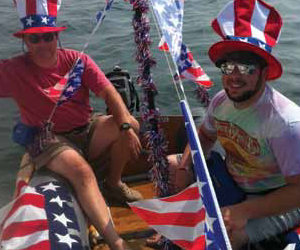 This winter, we needed to fix a keel bladder valve on our 25-year-old Avon inflatable dinghy. A Web search revealed it was a Honeywell A8 type and that Honeywell Leafield is now Leafield Marine (www.leafieldmarine.co.uk). A retail source could not be found, but an email to Leafield was answered overnight by Sue Reynolds, letting us know the valve was still available, along with a request for our address since we needed just one. It arrived in the mail from the UK a week later, along with a Merry Christmas wish. Gratis. That is service above and beyond! Thanks Sue! Our next inflatable will definitely be equipped with Leafield valves.

I purchased my sailboat almost two years ago. After spending months addressing pressing matters of repair and improvement, I noticed that the Weems & Plath ships clock was not working. I tried replacing the battery to no avail. I carefully packaged the clock and sent it to Weems & Plath (www.weems-plath.com), explaining that it came with the boat and was well out of any warranty period. Within a week, the clock was returned, polished, with a new movement, and a statement for $0. I was very pleased and impressed.

About three months later, after making the trip from Virginia to Puerto Rico, I noted that the Weems & Plath barometer showed very little variation, despite dramatic changes in the weather. Again, I sent it to the maker with a note that it came with the boat and was at least 10 years old. And again, the barometer was sent back promptly with a letter explaining that it had been tested, recalibrated, and seemed to be working fine-no charge for the service.

My thanks to Weems & Plath for customer service above and beyond any reasonable expectation.

Our early Raymarine RL70RC chartplotter/radar suddenly developed a display problem. After researching possible upgrades and local repair options, we learned that Raymarine offers an online repair service through their website (www.raymarine.com) for out-of-warranty products with a pre-quoted repair price.

I sent off our unit on a Saturday, expecting a reply in a week or two. Surprise! At 11:38 a.m. on Tuesday, I received a personal email from Mike Deluca at Raymarine, telling me he had replaced the LCD module for less than the originally quoted price, had made sure the software was updated, and we should have our display by the end of the week. It arrived Friday a.m. It is now installed and working like new.