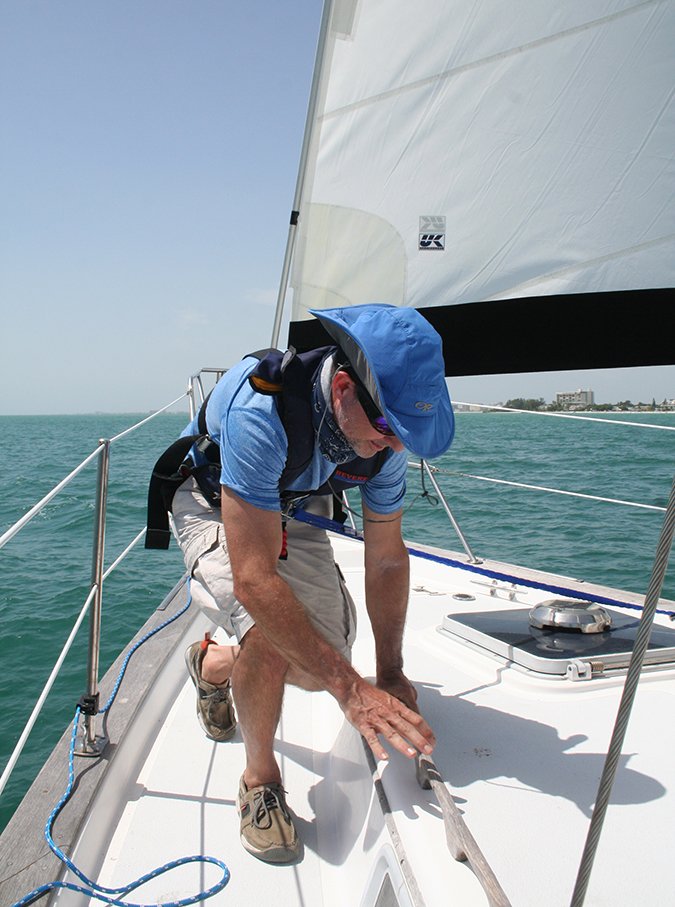 In 1935, a Boeing bomber carrying five of the Armys top aviators, crashed in a crucial demonstration flight on the runway in Dayton, Ohio. This was a highly experienced crew who’d logged dozens of hours of flight time on the plane. What went wrong? A simple human error. The cockpit crew had neglected to put the elevators in the take-off position.

It was this event that led to the more thorough pre-flight checklist that makes flying so safe today.

The widely publicized death of Jon Santarelli, an experienced racing sailor who went overboard during this years Chicago Mackinac Race should serve as a wake up call to everyone in the sport of sailing. We need a checklist. But more importantly, we need to follow it.

True, part of our current problem is gear-related. Much of today’s safety equipment is introduced without sufficient testing or research, and voluntary recalls are common.

But the bigger problem is psychological. Many sailors don’t believe they can take fatal falls. The idea of falling doesn’t inspire the same level as fear as it does for a climber. A misstep seems unlikely and survivable. We can swim. Someone can turn the boat around and pick us up.

A disturbing pattern has been widely documented in aviation, military, medicine-and many other professions in which lives are on the line. Contrary to accepted wisdom, experienced professionals are just as likely as a well-trained novice, often more so, to make a potentially fatal error.

This isn’t just a matter of old salts becoming complacent. Sailing is far behind other risky activities, such as climbing, in preparing participants.

While we’ve tested and retested man overboard tactics, research into the regular routines proven to keep sailors on board is sparse.

Like airplane pilots and surgical teams, climbers have a checklist they go through before each climb. Safety procedures, including spoken checks-On belay! and Belay on! – are embedded in the activity.

Sailing takes a different approach. In nearly every organized offshore event the focus is primarily on equipment inventory. It is left up to the captain to establish their own emergency procedures and training regimen.

In fact, the idea of rules for cruising sailing causes some sailors to bristle. We are, it seems, independent-minded to a fault.

In this issue, a report by technical editor Drew Frye suggests a curriculum for offshore sailors including basic checks. It’s a simple idea we hope will catch on. If you have a checklist that you use before going on watch or leaving the dock, wed like to share it. Send it to practicalsailor@belvoir.com.